Goodcore to release Ryan's Hope's “Apocalypse In Increments” on vinyl 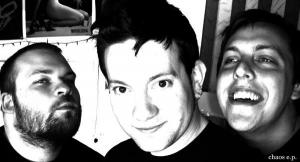 Ryan's Hope's 2006 full length Apocalypse in Increments is set for release on vinyl soon via Huntington Beach based Goodcore Records. The Joliet, Illinois based three piece originally released the album on CD on Punknews Records. The LP, pressed on red and black, is available for preorder through Goodcore and Vinyl Collective, with the latter hosting a contest to win test pressings.

All three members of Ryan's Hope are also members of The Reaganomics. That band has a new full length titled Get Lost, Stay Lost, which is due out digitally on Red Scare on October 20th. On September 26th the band wil play their first show at The Mutiny in Chicago. They'll follow it with an apperance at the 4th Annual Red Oktoberfest at the Beat Kitchen on October 23rd with Off with Their Heads, The Copyrights, La Plebe and Smalltown.