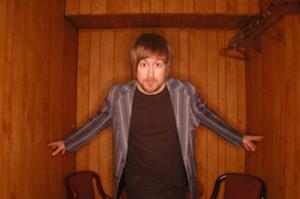 In a time when bands and artists are compromising themselves for big rock and roll dreams, it's refreshing to see an artist who has said "fuck you" to the allusions of fame and fortune for a simpler, but happier existence. With a new, darker album slated for early next year, a VW Rabbit full of re-used vegetable oil and a musically liberated soul, Fred Mascherino of The Color Fred, and formerly of Taking Back Sunday, sat down with Gen Handley from Punknews to discuss why he's in a happier place now and what the color Fred actually looks like.

Howâs it going? What are you up to right now?

Well, things are great and Iâve been going through some mixes because we just started recording the next album. Iâm pretty much done writing it, but we went and recorded the first half. Itâs been a really mammoth writing task because for the first time ever, Iâm trying to write about a loose concept - about a story.

So itâs been a solid day thus far?

Oh yeah man, just hanging out. My car has been recently fixed. I donât know if you know this, but I have a car that runs on used vegetable oil. (laughs)

Yeah, itâs an â82 Volkswagen Rabbit. Iâve had it for about three years now and every once in a while, things get a little shakey on it. Itâs all good now and I was out this week filtering new oil that I get from a local Chinese restaurant. (laughs)

So how is The Color Fred going?

Itâs feeling good. I mean, the EP (The Intervention) was something I did for fun and also because I wasnât ready for an entire album to come out yet - and it was also for Record Store Day. This is a band that I started as a side project and then it got thrust into becoming a full-time thing because obviously there were some changes in what I was doing. So now, Iâm pushing a record full time that was meant to be a side project. Iâm really excited about the second record and definitely anxious to get it done and out there. This is the first major recording Iâve done since it has become a full-time thing. You know, I was still in Taking Back Sunday when the last recording was done.

At the beginning of this conversation you had mentioned that the new album is loosely based on a concept. Can you explain what that concept is all about?

The idea is a fictional story about this couple going through a bunch of stuff. The town I grew up in is called Coatesville - itâs like two towns over from West Chester. Itâs the rougher city in the county and itâs recently had a crazy string of arsons earlier this year - like, in the month of January there were 16 fires. It got to the point that about 50 houses were burned down and also about a dozen buses too. So the situation there got out of control and thereâs a lot of anxiety with the people who live there - including my family. So I wrote a song about that situation and that song grew into a fictional story with Coatesville as the backdrop. There are also songs about not being able to sleep at night and a bunch of references to the fires. Itâs a big undertaking for me because Iâve never written anything that focused before, but it was really inspiring. I mean, my familyâs still there and I lived there for like, the first 25 years of my life.

Whatâs the name of the new album going to be?

I donât have a working title yet that Iâm ready to put out there, well, maybe one or two names right now. Like, Coatesville is a steel town and as a kid I would always see these crashed-up cars piled on top of each other, getting ready to be melted down. So thereâs a lot of wreckage around. In the albumâs story, the town also becomes like wreckage because of all the fires - smoldering wreckage. So Iâm thinking that Smoldering Wreckage might be a title. Iâm not officially saying thatâs what itâs going to be though. (laughs)

What else is inspiring you to write these days?

Well, Iâm putting together a new band and thatâs exciting. I decided to wipe the slate clean and Iâm putting some new guys together.

Can you say who this new group will include?

I canât mention who they are right now, but I want to have some guys who people might be familiar with and make a really interesting group. So itâs definitely a rebuilding moment and Iâm literally tearing it down and building it back up the right way, in a way I would have wanted it if I had been planning on doing this the whole time.

What do you mean by that?

I mean, Bend to Break (the first album) was with a friend from here who I hung out with all the time and when we recorded it, the process was very laid back because I was still in another band. And then all of a sudden, I was like, "Oh shit, Iâm leaving that band and Iâm going to focus on The Color Fred now." So I got more of my friends involved, but now, with the new album, Iâm thinking about things more. The subject matter of the second album has brought on darker songs, which are little bit meaner, so I want to get a solid group of guys together for the newer stuff.

Cool. What are you listening to now?

Man, Iâm listening to a bunch of different stuff right now. I just got my needle replaced on my record player and I have about a hundred records so Iâve been listening to them a lot. Like, old stuff like Firehose, even Peter Gabriel and Led Zeppelin and the Bad Brains. For the newer stuff, I like Good Old War and I saw them live and thought they were amazing. I also recently got the Dangerous Summer CD and I like that.

Have you listened to the last Taking Back Sunday album (New Again)?

(pauses) To be completely, 100-per-cent honest, I have not given it a full listen. I donât know why, but I just think it might be tough.

This might be a silly question, but why is it tough for you?

So you havenât heard the song "Summer, Man" yet?

Is that one of the "ones?" I heard something about "Capital M-E" and I listened to that song one time. But no, I havenât heard "Summer, Man" - is that maybe another one I should listen to?

(laughs) Yeah, I guess maybe you should becauseâ¦

Because it could be about someone you know? (laughs)

Sorry man, I had to ask.

No, thatâs cool - I donât care. I put "Capital M-E" on and I was like, "Whatâs this about a snake slithering away?" and it just sounded cheesy and clichÃ©.

Yeah, fair enough. So you before The Color Fred, you were in two bands, correct? Breaking Pangaea and then Taking Back Sunday?

Actually Brody was the first band I ever toured across the country with. Before that was high school stuff and I would go into the bars in Philly to play when I was 17. The venues were like, "Alright, you better stay away from the bar." (laughs) But after that, once I got into college, it was Brody, and that led to where we are now.

So how has your past lives in other bands affected your place as a musician now?

Like, when people asked me why I left my last band I would say, "I wasnât happy." And they were like, "Yeah, but the moneyâ¦" and Iâd say, "Yeah, well I did do it. I stuck it out and Iâm doing this and now Iâm happier." I mean, Iâm used to this. Before, I had jobs where I was digging holes for plumbers and painting houses and warehouses and doing blacktop on parking lots. At least Iâm not going back to that. (pauses) Sorry man, Iâm not sure if I answered your question. (laughs)

No worries. I guess I was wondering how these past creative experiences have contributed to your current music?

Well recently, Breaking Pangaea reunited in my basement for one day. We played all of the songs - about 25 or something - and we played some that werenât even released just to see if we could remember them. It was weird to play songs that you wrote seven years ago and havenât played since. But it really spelled things out and I was thinking, "Man, if I rewrote this song now, it would not go like this." (laughs) My thing is that Iâve always wanted my music to be different and not boring. The only criticism I hear about Bend to Break is that itâs too poppy. But that was the whole mission. I was in TBS at the time and I had all of those songs in my head that were too poppy for TBS so I decided to go record them anyway to see how they came out. Now Iâm recording a new album and I can do anything I want and it feels good.

Yeah, thatâs a great way of putting it.

Is the future bright?

Yeah, definitely. Between putting the new band together and the acoustic stuff Iâve been doing, itâs been a lot of fun. The acoustic tour is a very different side of it. At my acoustic shows, I play songs from all these bands Iâve been in that weâve been talking about. Iâll play Breaking Pangaea songs. Iâll play covers. Iâll even play TBS songs. I take requests because I write a really loose set list and just go with the flow - itâs a pretty cool show. When I was on an acoustic tour with Craig Owen (lead singer of Chiodos) earlier this year, I had a lot of fun so thatâs why Iâm going out again.

Ok, back to the new album. It sounds like it may be a little heavier, am I right?

Yeah, to an extent. Itâs still going to sound like a lot of the music youâve ever heard me write, but there will be some screaming moments and more produced, thick guitar parts. Iâm not saying Iâm recording a heavy album, but it will be a meaner version of me.

Well there be any songs about your last band on the album?

Actually, no. I made a decision to never do that again. I trashed the lyrics to a song that was about my frustration with that situation. So I ended up redoing the lyrics because Iâm over it.

Right on. Alright, my last question: Can you describe to the Punknews readers what the colour Fred actually looks like?

Well it changes, you know. It was definitely the colour of forest and the Northwest on the first record - like a breath of fresh air. But the new record is going to be more the colour of fire - a dark glowing red with a black and sooty-ash colour. Itâs like a camp fire thatâs going out and the log is still glowing. Itâs not quite bright orange - thatâs the colour of my Rabbit. (laughs)

Tours: Nations Afire with Strung Out, Death By Stereo