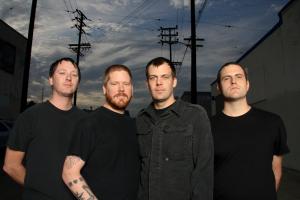 American Steel are in full on support mode for their most recent Fat Wreck Chords release, Dear Friends and Gentle Hearts. Tonight we bring you an interview between our own John Numbskull and American Steel's Rory Henderson.

You guys definitely came from a very prominent scene in punk music, what does Oakland mean to you now?

It was a great place to be a teenager and early twenty something seeking out our own adventure. There were a lot of good bands, a lot, and a lot of good people so it was exciting. For us it just came so easily due to the community that people before us had developed; bands like Op Ivy, Blatz, Crimpshrine, Filth, Econochrist, too many to mention really. I feel like we came along, injected some energy like those before us, added our own little mark and encouraged younger kids but for one reason or another that chain was broken and that scene that you speak of is really not much to speak any longer. So it goes. Ultimately, I don't see Oakland through a musical or scene prism, I just see that time as a historical one and personally my own experience coming of age in it. I love Oakland, live here at the moment, but I see in Oakland a place where many of my family and dearest friends live and I'm lucky to have them. I think this more than anything is what makes us call any place home.

What bands are keeping you guys excited with punk music?

Take it from the asshole that has "Stay Punk" tattooed on his arm. As it has been for time immemorial, utter pop culture shite, theists, conservatives, slumming it Brooklyn hipsters and mainstream top 40 pap have kept punk relevant. We give thanks. So, very, weary.

It seems that when most bands get back together, they tend to write an album and ride it for awhile. What made you guys want to go back to the studio?

To film a reality show for the A&E network documenting Scott's dramatic recovery and transcendent spiritual redemption from "severe psychotic sexual addiction". Also we had the songs percolating and had made the decision that we were going to do another record at some point so it was a matter of counting backwards from when we would be able to tour and generally set aside time towards another album cycle. More than two years between releases is too long in my book. Also, we see ourselves as picking up from where we left off rather than any type of reunion so it just feels like a natural pace.

What fueled this new album? Tell me a bit about the recording process.

Hamm's the beer refreshing. The first song written for the record was "Emergency House Party" and I think it really set the tone much the same as "Sons of Avarice" did for Destroy Their Future. Both were flagship songs of sorts. That they are both the first songs in sequence on their respective records is probably not a symbolic coincidence but it wasn't purposeful or premeditated either. The recording and coalescence of both albums represented rejuvenation for me personally albeit with different themes; one murky and political, the other more fraternal but both hopeful in their own ways. The session for the most recent record was more off the cuff, with songs gelling in the studio, some even being written and arranged and put to track within an hour's time. There has always been an element of improvisation to our recordings but maybe more than ever on this album. We have such freedom working in our own studio and are so comfortable with one another that the process in general is a laid back and confident event. For example, Ryan will experiment with his harmonies whilst cursing having to rhythmically match my slurring improvised lead vocal lines. It always makes me giggle in the control room. At the moment we are rehearsing for live and I find myself in the familiar (and frowny) position of learning how to play some of my own guitar leads which were recorded, as they often have, completely from off the top of my head and out of my ass.

On this new record, what sparked "Your Ass Aint Laughing Now"?

Like many songs I write in the second person there is often more than one individual I'm addressing. You can try to guess who I'm singing about or you can just insert your own favorite d bag who in a brief moment of cosmic justice gets exactly what they've had coming to them. The song is a bit of gleeful mean spirited fun and if you've ever indulged in the distinct pleasure of saying these or similar words to someone's face, take heart, it's ok to be a little petty if you're doing it with a crooked smile. There's a quote from an Op Ivy song in there which I thought was fun because as I was writing the song I kept thinking about "Yelling in My Ear" thematically. Josh Staples did a vocal response on a New Trust quote from the second verse and boy do I love that man's voice. Most fun was probably conducting 20 of my friends singing the chorus a cappella. Ha ha, having to utter the sentence "someone was sharp on ass" is definitely a high point in my musical career. We even included a little call back to a song from our first record. Btw, while we're on the subject of sonic Easter eggs, we have one song in our library which quotes both "Adagio for Strings" by Samuel Barber and "Party All the Time" by one Edward Murphy within a 13 bar 3/4, 5/4, and 7/4 time phrase (suck it Rush). I've waited years for some asshole to notice this and thus validate my existence. Alas, it seems, I've waited for naught.

Besides The Fest 8 and the West Coast tour, what else is in store for American Steel?

North America and Europe, and we would like to see ourselves in Australia and Asia at some point.

Tell me about your relationship with Fat Wreck Chords. Do you feel that there is more work being put into the band more so than before?

Fat is a great label and we're very happy to put out another record with them. They offered us a lot less money than Universal and Warner but Mike knows how to show a guy a good time. Plus he has photos, amongst other things.