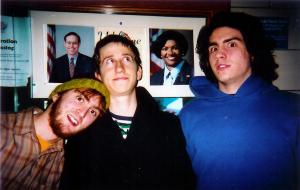 Punk rock celebrity cum radio personality Ben Weasel raised eyebrows earlier this year with an on air, ten-minute diatribe against DC area pop punk trio The Max Levine Ensemble. Now, the band has struck back with a tongue-in-cheek new "split" 7" titled Ben Weasel out now through their website. TMLE frontman and sometime solo artist David "Spoonboy" Combs checked in recently with Punknews' G'Ra Asim to discuss the irony of Weasel's vehement disapproval, the emotional side to political music, and how it feels to be identified as the literal definition of folk punk. Catch Combs on his European solo tour now through October 15. More information is available at the Spoonboy website at www.iloveyouthisisarobbery.com

How did the band come to the decision to make the Ben Weasel 7" and what songs are going to be included on the release?

Well, are you familiar with the Hickey/Voodoo Glow Skulls split 7"?

Iâm not, actually. Ok, well it was definitely partially in homage to this record that came out in the nineties. The story behind that is, as I understand it, Voodoo Glow Skulls and Hickey played a show together and the Voodoo Glow Skulls denied Hickey all of the door money or something like that. So Hickey stole one of their saxophones as a revenge. So I guess what happened was, the Voodoo Glow Skulls got Hickeyâs phone number and they got all their friends to start leaving death threats on Hickeyâs answering machine until Hickey returned the saxophone. I forget exactly how that was resolved, but shortly thereafter Hickey released this split 7" with the Voodoo Glow Skulls which was one side Hickey songs and other side it was all the answering machine messages of them leaving death threats. But then it was also the guy from Hickey playing the Voodoo Glow Skullsâ saxophone in the background of these messages. I always thought that was a pretty brilliant revenge scheme, a pretty decent "fuck you" and something that Iâve always appreciated. You know, punk rock is learning the art of the creative "fuck you". To get back to why we decided to put the record out, the one thing when we got the idea was that we thought it would be less boring than most punk rock records. I think that Ben Weaselâs radio show where heâs commenting on mainstream sports and posing it as this punk rock radio show is in a way a testament to how boring punk rock is where itâs like an ESPN radio show thatâs supposed to fall under the umbrella of punk rock. But itâs not just that, itâs that with thousands of bands releasing thousands of records, everything is kind of indistinguishable. After he spent ten minutes or however long it was shit talking us on his radio show, weâre like "you know, we got dissed, but at least this is a narrative." This is something more interesting than just releasing songs. And then of course, he has a platform and a lot of people who listen to him based on his punk rock celebrity status and he uses that platform basically to rip on us and discourage anybody from checking out our music. We needed to then create a platform to respond to that, because if you listen to the radio show, what he says is ludicrous. Heâs blasting us for not having the same musical quality as U2 of all bands, and blasting my singing voice for not being palatable enough. This is coming from a guy who based his whole punk rock career on singing extremely obnoxious songs in a barely listenable tone - at least the early stuff.

Your lyrics are a prominent point of entry for a lot of your fans. Does the TMLE song title "Arenât All Songs Political? Arenât All Songs Vaguely Self-Referential?" reflect an actual conviction of yours about songs and could you explain what that means if so?

I guess thatâs kind of referencing the idea that all songs are political in so much as how youâve taken the time to create them, how youâve taken the time to [make them available]. So even a band that just writes love songs- take Delay for example; theyâre a band that has a lot of convictions about making sure that their shows are always all ages, always really accessible to people, that they arenât barriers between the band and the audience and that everybody has the chance to have a community come out of it. You donât find that as much in their lyrics because their lyrics are mostly love songs, but each one of those love songs is political in itself because of the context in which it is used. And so vice versa you have Rage Against The Machine, who has very political songs, but the songs, outside of the lyrics, appear in the context that theyâre being sold to you by a big corporate mega media. I shouldâve used a more contemporary example than Rage Against The Machine, but thereâs politics involved in that, and I think the song title references that. But also, Iâm someone who tries to put politics into my lyrics as much as I can, and with that song in particular that was actually responding to some self-pressure to write political songs when I was writing a lot more emotional songs.

Along the lines of what youâre saying, Iâve heard the catchphrase "the personal is the political". When I heard that song title, I thought it might be a response to criticism from your audience for not being political enough.

I think that when a band has a message, itâs really easy to dismiss that message when it comes in the form of empty rhetoric. And thatâs why I think a lot of people who were interested in the politics of punk rock that were a lot more popular around the early 2000âs ended up getting burned out on so many empty slogans. In general when expressing your politics, people will appreciate it a lot more when they understand where youâre coming from. Regardless, any idea that you have is going to be bolstered by any kind of interpersonal connection that you have with somebody. I get sick of political music that feels like it comes from people who arenât in touch with how they feel or arenât expressing where itâs personally coming from.

"Complex Machines" off of OK Smartypants seems to be a rumination of physical and emotional intimacy and the complications therein. Iâm interested in the line "kisses like these assassinate Presidents/ these are the things that bring down Empires." Whatâs the thinking behind those lyrics?

I think that song is about a really passionate emotional experience that I had. Being a political person and being involved in political activism, all of those politics come from a passionate place. And if youâre not living your life passionately, and not experiencing or trying to experience things like love and emotional connections, then itâs harder for your politics to be just as passionate. At the time that I wrote that song I was reading Emma Goldmanâs autobiography and if anyone who reads this interview hasnât read it, I would recommend it as my number one favorite book. Itâs just amazing to read about her life and how politically involved she was and how in every political moment in the early 1900âs she was there passionately expressing her politics. When you read her autobiography you read just as much about her love life and how important it was for her to be able to express her emotions and I think thatâs also kind of what that song is referencing. Just trying to live your life in a way that you can reflect your politics and be passionate about them but also holistically having a fulfilling emotional life as well because those things complement each other.

I notice that your name is mentioned specifically under the definition of folk punk in the Urban Dictionary. Were you aware of that at all?

So itâs kind of like youâve come to embody the colloquialism about having your picture in the dictionary definition of something. Is your legacy or association with the term folk punk something that you anticipate consciously while making decisions about your career?

No. You know, itâs punk-influenced acoustic music. I think of it more as acoustic pop because some of the songs are just pop rock songs more than anything. In the past five to ten years thereâs definitely been this kind of folk punk scene that popped up around Plan-it-X and Against Me!-influenced stuff and thatâs kind of what people think of with folk punk. But if anybodyâs picture should go in the dictionary next to folk punk it should be Billy Bragg and thatâs the music that got me interested in playing solo.