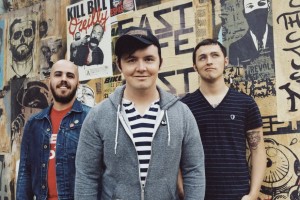 Contributed by Noah W.K., Posted by Ben Conoley Side One Dummy Interviews 13 years ago

Oregon's own Broadway Calls have proven themselves to be more than your typical run of the mill punk band. With their extensive tour schedule planned for their new record Good Views, Bad News on SideOneDummy Records,one thing for certain is that Broadway Calls does not seem to be slowing down anytime soon. Noah W.K. spoke with singer Ty Vaughn about a handful of current topics, including, the new album, Green Day and the influence of being from the state of Oregon.

Your new album Good Views, Bad News comes out August 18th on Side One Dummy Records, tell us what to expect from the album and tell us a little bit about working with Side One Dummy.

We tried to make a shorter, more focused pop punk record this time, and I think we accomplished exactly what we set out to do. When Joe Sib told us that we could work with Bill Stevenson, it was instantly exciting and intimidating. We'd never worked with a producer, or a label willing to put up the kind of money to allow us to. Everything that's happened this last year with SideOneDummy has been crazy. Joe Sib and Bill Armstrong have put together this awesome family of guys and girls that work really hard for the bands they believe in. It still hasn't sunk in that we're label mates with Chuck Ragan yet. That blows my mind every time I listen to him.

You are a punk band from Oregon, a place where we donât hear many bands coming out of. Being from Oregon obviously been an influence on your song writing, tell us what being from Oregon means to you.

Oregon is a beautiful place, and it's a hard place to leave. I mean, not only is Portland an awesome city by itself, but also all of our best friends and families live within 45 minutes of it. It's hard to explain, but it's just home ya know? Ask any band that rolls through town though, and I guarantee they've had a good time in Portland. There's definitely not a huge pop punk scene in Oregon, but it's fun.

We were only on the Warped Tour for five days, and that was plenty. The amount of awful bands exceeded even last years' lineup. There were a few though, that I really loved to watch every day. Bad Religion, NOFX, and Less Than Jake were all obviously rad. Bayside, Gallows, the AKAs were fun to watch everyday. I wish we were on the part of it that had Bouncing Souls, Anti Flag, Thrice, or Cheap Girls. That would have made things a lot better.

Word on the Internet is that you are a very handsome group of guys. What do you have to say about that?

Well, yeah. I wrote that. I was told to write a bio for our band a long time ago, and I just filled it with blatant lies. I mean anyone who comes to one of our shows knows the awful truth.

My favorite release of yours is your split with Teenage Bottlerocket, was TBR a band you always wanted to work with? How did that all come to be?

Teenage Bottlerocket was one of the newer bands that we were constantly listening to when we decided to start this band. We still listen to them all the time, and I plan on going to buy their new record tomorrow when it comes out. They're amazing. We were all Lillingtons fans, but TBR is one of our favorites. We did a short tour with them and Dead To Me in early 2008 and I think that's when the idea of a split started to surface. They had a couple songs leftover from their last record, and so we wrote one and did a Billy Bragg cover. We recorded with Jack from Comadre and Adeline put it out. It was fast and fun. Those guys are hands down the BEST Ramones-core band around today.

The new album will be coming out on both compact disc and vinyl and you have released 7ââ records in the past. Is vinyl a format you are adamant about working with?

Yeah it's important. CDs are dying. Digital is easy, but a tangible way of buying and owning a record is always going to be important for music lovers. Vinyl is the wave of the past and future. It's timeless. Josh bought me …And Out Come The Wolves on vinyl when I was 15 for my birthday. I had already owned that record on cassette and cd, but after I got the LP I listened to it way more, because it sounded better, and it was just more fun.

Green Day has obviously had a huge impact on you as a band in ways more than musically, how important is the role that Green Day played in comparison to where Broadway Calls are at now?

Well, Billie started Adeline. We grew up listening to not only Green Day, but also Pinhead Gunpowder, One Man Army, The Influents, Fleshies and all the other rad bands he signed. When we found out that Adeline wanted to re-release our first record, it was pretty surreal. I don't know the Green Day guys at all, but I wouldn't have ever tried writing my own songs as a teenager, if it wasn't for that band. So yeah. They've always played a huge roll in where we are today.

Following the release of the new album you tour schedule stays very consistent, with a tour of Europe and then another tour in the states. How important is touring?

Touring is the only reason to be in a band. You could sit in your room all day and write songs. You could make and release a record. But the only way to really make an impact and feel like it's all worth it is playing live and having the crowd sing louder than the PA.

Where are your favorite places to play?

Anywhere in California. Denver, Berlin, London…. But really it depends on who you're on tour with and what kind of stories you leave a city with.

Leave us with a juicy tour story.

I'm not sure if I can reveal anything too juicy, because honestly we're pretty boring…but there is video floating around of a pretty debaucherous evening in Zurich, Switzerland with Polar Bear Club from this tour we just got home from. I was a little worried that PBC wouldn't want to hang out with us anymore after that night. I threw up the next day. That never happens to me. Those guys can party, and we really don't. So I think they were a little surprised that they were helping me walk by the end of the night.

Videos: New-ish episodes of Vinyl Vlog featuring Ringers and The Riot Before