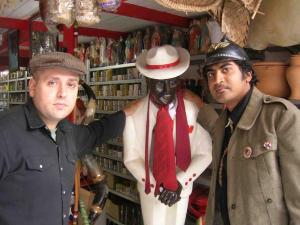 Contributed by worryrock, Posted by Aubin Paul In The Red 13 years ago

The King Khan and BBQ Show have issued a statement regarding their arrest for drug possession in Kentucky and subsequent missed shows. The band's publicist sent this to the Riverfront Times:

On November 16, 2009 [Tour Manager] Kristin Klein entered a guilty plea to 2nd degree possession of a controlled substance in Christian County, Kentucky. Ms Klein was driving a rental vehicle that was randomly stopped at a safety checkpoint. Officers located a controlled substance in the cab of the vehicle. Ms Klein was unaware of the contraband and the validity of her license was indeterminable at time of arrest. Under KY law a driver of a vehicle is responsible for its contents. Therefore, Ms Klein entered a guilty plea and is scheduled to appear on April 2, 2010 to provide proof of her valid license.

I wasn't given any information regarding what the controlled substance was, Could have been prescription medication for all I know - I've heard that particular precinct are known for being total dicks to touring bands, so it could have been something totally harmless. I also don't know how many of them were arrested, but Kristin is definitely the only one who has been charged with anything.

Touring has resumed, but "nothing has been announced" about KK&BBQ making up the shows in Kansas, Denver, Phoenix, and St. Louis that were missed because of the incident.

Check out the report here.