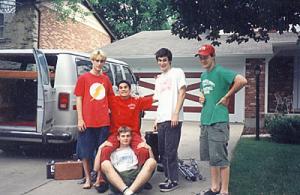 Contributed by acris, Posted by Aubin Paul 13 years ago

Indierockreviews is reporting on a possible Cap'n Jazz reunion for summer 2010. According to the report, the five band members - who went on to form Joan Of Arc, Owls, American Football, Make Believe, Ghosts And Vodka, The Promise Ring and Maritime - are rehearsing old material in hopes of putting together a 10-date tour.

The article goes on to suggest that Owls will also be reuniting as well, though under a different name due to a dispute with their old label. Cap'n Jazz's Analphabetapolothology was released in 1998 and compiled the band's discography.

Roger from Rehasher Responds to Recent Opinions/Comments About Record Sales