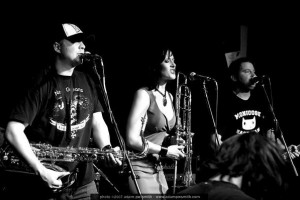 Contributed by Shogun, Posted by Richard Verducci Interviews 12 years ago

For close to a decade, Los Furios has battled drizzly, grey days in the city of Vancouver with its powerful, gritty style of grassroots ska, reggae and punk. In a time when ska music's relevance, or even its existence, is being questioned, the band is proving naysayers wrong by continuing to release solid albums while playing scorching live shows with no signs of cooling down. The month of November was warmed up with yet another unyielding Los Furios release called Run Devil Run. Sax player, vocalist and rhythm-advocate Ryan Glasgo sat down with Gen Handley from Punknews to discuss the new album and why ska is not dead.

My name is Ryan Glasgo and Iâm a tenor saxophone player and vocalist in Los Furios, from Vancouver.

Whatâs it like playing in a ska band these days?

Well, itâs a lot of fun first of all. I mean, itâs ska and reggae punk - weâre not a ska band exclusively and we blend a lot of genres of music into our style. What we do is what we do - thereâs no script that we follow. The album that just came out (Run Devil Run) is a mix. Like, on that album thereâs dirty reggae, there are some heavy-hitting ska shots with the horns and thereâs some vocal-driven songs. My background is in jazz and big band music, so this is different but a lot of fun.

When did you start playing sax?

I started when I was about 12.

How did that happen?

It was just something I always wanted to play. I got into the band program in junior high school and kept on going. I guess was a band nerd. (laughs) Maybe I still am. But as I got into high school, the interest peaked a bit more and I ended up taking lessons and studied music after school. I still study it and Iâve been with my teacher, Stan Karp, for almost 10 years now and I owe a lot to him.

So when you started playing sax as a 12-year-old, did you think that you would be playing in a band like Los Furios?

(laughs) Have you ever picked up any girls with your sax skills?

No. (laughs) Actually, I got flowers one time and that was lovely. (laughs) Iâm joking.

(laughs) Ok, so the new album is called Run Devil Run. How does it compare to the rest of the Furios albums?

We have a new guitar player - well, I canât say heâs new because heâs been with us for three years now. But weâre two-members different from our last album (Tread Lightly) and a lot of the writing is different. We have a lot of good melodies with a little bit of a Mexican and Spanish sound to it. Itâs a little more polished because the unit we have now is pretty solid. Iâm pretty happy with it.

Why the name Run Devil Run?

Itâs about how this band has been playing music for so long and weâve been working really, really hard at this. Thereâs been a lot of frustrating moments, but we want to take it to the next level and I think this album does that.

Yeah, I think youâre right. I mean, thereâs a number of ways you can read the title and itâs could be different for everyone in the band. I think the name is just dirty and mean and itâs about how we donât give a fuck - weâre putting it out on our own, the way we want to.

Like I said, there are some Mexican themes on the album and thatâs due to our experience playing in Mexico where weâve had a really good response. There are a lot of really good beats and rhythm in the songs. I mean, our society is pretty fucked up with how we learn music - we donât really learn how to play rhythm. In our society, we learn music in such a different fashion. Like, if you grew up in South America, youâd be tapping on a glass at the dinner table at the age of three and learning off-beat rhythms. Here, youâre given an instrument and learn how to play music before you learn how to play rhythm. Itâs kind of backwards.

What are some of your favourite songs to play live on the new album?

The new ones are actually all really fun to play live. Some of the ones that weâve been getting a really good crowd response from are "Heatâs Rising" and "One Last Time." "One Last Time" has a really good punk-rock feel and everybody seems to go nuts on that one. (laughs) I almost lost my front teeth playing that song recently.

Oh, it was just a case of some flying mike stands and instruments - it was a rowdy crowd. We tend to get that environment when we play because itâs high energy and we push the audience to have a good time. Sometimes we have to tell the crowd not to kill each other - well they can kill each other, but not us on stage so we can keep playing.

(laughs) How is the ska scene right now? Is it fairly strong?

Well, it is and it isnât. I can only comment on Vancouver and the music scene out here is really tough right now. We just lost Richardâs on Richards and a lot of bands have played there - not just ska bands. It was sad to see it close. So the entire music scene is hurting and ska music is part of that obviously. Iâd like to think, though, that the ska scene is still pretty strong and I hope it gets stronger. We have a pretty decent following and itâs awesome to see that at our shows.

What are the plans for Los Furios over the next year?

Before I answer that, can I go grab another beer?

(a minute later) Thank you.

So, the plans for Los Furios? Well, weâre definitely touring Western Canada and hopefully will make it out to Eastern Canada too. Weâre heading to Mexico to play a bunch of shows and festivals down there - we had plans to tour there last year, but the H1N1 things cancelled that. Other than that, weâre just going to continue to play as much as we can and get our music out there.

Your shows are pretty energetic. Whatâs the craziest shit thatâs ever happened during a performance?

Well, one time a kid broke his leg while we were playing and we had to stop for about an hour while the ambulance came - he was just moshing and dancing around. There have been a few fights too.

So a couple of years ago, the band dropped the "Los" and replaced it with "The." Recently, you switched back to using "Los" at the beginning of your name. Can you explain that?

Well, one of the original members, Pedro, was from San Salvador and brought the Latin influences to the band, including the name, Los Furios. Anyways, he got deported back to San Salvador so we changed it to "The" because we no longer had that Latin presence. After Pedro was gone, we tried changing our name to The Furios, but every time we played, weâd always be published as Los Furios so it just became too difficult and people got confused. We just said, "fuck it" and went back to our current name.

Cool. What is it about the ska community and culture that you love?

So, you love it because not only does the genre include different music styles, but it also attracts many different listeners as well.

Or breaking legs. (laughs) Itâs a fun atmosphere weâre trying to create. Weâre up there trying please not just ourselves, but the crowd too and we really feed off the energy.

Who are your biggest musical influences?

As a saxophone player, my influences are old school jazz guys like Dexter Gordon, John Coltrane, Charlie Parker - those guys. But then there are also bands like The Slackers and Bad Manners. Some influential punk bands have been Bad Religion, Pennywise, NOFX and Rocket From The Crypt. I love Rocket from the Crypt. Obviously Rancid is big influence as well. I donât know where all those artists fit in, but theyâre all influences in some way.

Is there anyone in particular who you have modeled your playing style from?

When I started to play, I tried to imitate a lot of horn players to see if I could sound like them, but the more and more I played, I started to develop my own style. Itâs your own story, right? Every musician speaks of themselves when they play. I like to think I sound like me. (laughs)

So what kind of story do you try to tell when you play?

Man, itâs different every time I play. I might be having a shitty day and my story is that I hate my day job right now or maybe Iâm loving life and I tell that story. It just depends from night to night and from moment to moment - itâs never the same.

The current lineup seems fairly solid right now. Do you see Los Furios continuing for a while?

Yeah, well the band has been together for almost 10 years now and itâs hard to quit because the shows are a lot of fun. Like I said, this lineup has been together for about three years and everyone is very devoted and passionate about the band. We tour really well together and thatâs a big part. Itâs one thing to be able to play together, but to travel and be creative together is just as important. Playing music is a personal experience and you need to get along.

What do you have to say to those who feel that ska is dead?

Come down to a Los Furios show near you and see for yourself.