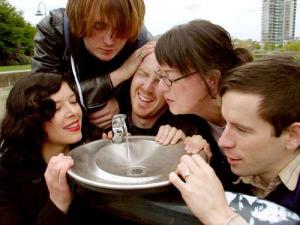 Vancouver dance-punk act You Say Party! We Say Die! has announced US and Canadian tour dates. The band is returning to the States for their first shows there since 2006 in March. April will see the group heading out across Canada. You Say Party! We Say Die! is supporting last year's Paper Bag Records released full length XXXX, which just saw a US release earlier this month.