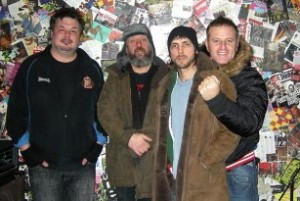 Contributed by tonynoidea, Posted by Bryne Yancey No Idea Tours 12 years ago

Leatherface have announced another American tour that starts on May 8 in Lansing, MI. Ninja Gun will support on all dates, while Young Livers will join the second leg of the tour starting on May 17 in St. Louis, MO. All three bands (as well as dozens of others) will be appearing at Rad Fest.

Leatherface continues to support their new album, The Stormy Petrel, which is currently streaming at their Punknews.org page. Young Livers' new album, Of Misery and Toil, is due out on April 27, 2010 via No Idea Records, and Ninja Gun plans to issue a new EP through Sabot Productions later this year.

Videos: The Dead Weather: "Die by the Drop"