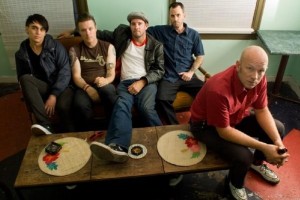 Swingin' Utters have announced their first new record since 2003's Dead Flowers, Bottles, Bluegrass, and Bones. The record, titled Here, Under Protest is due out June 22, 2010. The band adds:

Swingin' Utters are currently in the studio finishing a brand new album, with a release date of June 22, 2010 on Fat Wreck Chords. This will be the band's first studio album since 2003's Dead Flowers, Bottles, Bluegrass And Bones.

The band will also be hitting the road for a run of dates beginning in June. Check those dates out here.

Earlier this year, the band was the subject of a tribute album titled Untitled 21: A Juvenile Tribute to Swingin' Utters.

Update: Fat Wreck Chords has notified Punknews.org that there is no set release date for the upcoming Swingin' Utters album but confirms that they are planning to release it.

Videos: Silversun Pickups: "The Royal We"