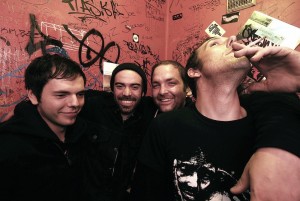 Contributed by matt_b, Posted by Richard Verducci No Idea Interviews 10 years ago

There maintains a certain fascination with the elusive "Gainesville sound." Maybe it was yet another easy term to help classify bands. Perhaps the phrase is in part due No Idea Records, where some of the most successful bands shared more than location in common: rough, raspy vocals, loud guitars, and beards. Because of this affinity, it didn't take long for Gainesville transplants Young Livers to be given the label. Whether accurate or not, it does not seem to factor for these guys or their success. With the release of their sophomore effort, Of Misery and Toil, last month, and a series of supporting dates (formerly with Leatherface) things seem to be rolling in the Young Livers camp. Punknews contributor Matthew Bentel recently spoke with Livers' guitarist Dave Hall about the direction of the new record, the difficulty of producing good cover art, and the eclectic, surprising comparisons this "Gainesville" band receives.

So you just wrapped up a quick tour in Europe. How'd that go?

We got home a few days ago. We did about 3 1/2 weeks over there. We had a blast. It may have been too quick though, I was sad to say goodbye to our homies/tour mates Bridge and Tunnel and our main squeeze Jan of Yo Yo records. Both bands previously toured Europe with Jan and it was really exciting to be back. The shows went incredibly well, we were able to meet up with old friends and make new ones in new places. Never in my life have I met so many welcoming and hospitable people. Itâs refreshing to meet people that really care about punk rock. I hope we can go back over sooner than later.

Speaking of touring, you guys have always had to keep it minimal. Thankfully I got to see you at the Fest, but never elsewhere. I was happy to see you guys making it to Europe, and now in the midst of planning a fuller US excursion (with Leatherface). Where does touring fit on your list of priorities in relation to other commitments?

We have kept it pretty minimal in the last year. Michael lives on the opposite coast as the rest of us so we had to keep the touring to a minimum to be able to travel back and forth writing and recording. That process took a bit longer than we all anticipated and we were all anxiously waiting for Of Misery And Toil to be released so we could get back on the road. I think I can speak for all four of and say that this band is all of our main priority and touring is what keeps us all sane.

You released your new record, Of Misery and Toil, at the end of April. I've been listening to it a lot recently. It features a lot of your trademark rough, melodic vocals. Very intense, picking up right where The New Drop Era left off. Of Misery is us developing as a band. With the addition of Michael on vocals the sound dynamic changed. We were able to have all those harsh parts where the vocals are in your face but we could also lay back and let the vocals carry the melody. I really like the way Matt and Mike work together vocally. Also we took more time arranging the songs for the new album. We wanted everything to sound a bit heavier with more layers and more melodies. We wanted to write something the we could get on stage, turn up to ten and blow faces off for 25 minutes. I hope we succeeded. Of coarse all the unusual timing, stop starts are still there as much as The New Drop Era but I think the new record sounds a bit more cohesive and a little more straight forward at times.

I would say it definitely features better production and a more realized sound, but why would you consider it more cohesive and straight forward? Of Misery just feels whole for me. It's the first record written as a unit. Every element was thought out and put together by the four of us. For me, our prior material felt as though it was a little to pieced together. Some of the songs on New Drop were riffs Matt and I had written for our previous bands that we never got to use. As much as I like earlier Livers songs I feel more passionate about everything that we have written with Michael and as a whole band.

Of Misery is a lot more straight to the point than our previous material. When we first got together all the songs had a lot more changes; stops, starts etc. It was a little more chaotic feeling, almost as though it was going to fall apart at any second. We wanted to play short, fast and out of control. We still play loud, fast and our sets are still short but I think we learned when to lock in and rock out.

Well, the new record seems to be getting only positive reviews from some of the music webzines I've been reading. It's getting a lot of comparisons to 70's punk rock, 80's metal and 90's hardcore. Is that an accurate description?

There are elements of all those genres in our music and probably a lot more that we aren't even aware of. If you get four people together that have been listening to music their whole lives, you are gonna come up with something that you can't really pin point an influence. We all grew up in different scenes within the punk community and as we have gotten older I believe are musical tastes have also grown up. Our interests and influences are always evolving. It is interesting to see what other folks gather from our music and I don't think any description could be completely inaccurate. I will say that I never thought I would see 80's metal in a review!

As a more gritty punk rock band coming from Gainesville, do you ever feel trapped or predetermined given the more recent musical history of the city (i.e. that "Gainesville sound" people are always talking about) or do you see it as more a facilitator?

I think when people see No Idea Records they automatically think of the bands on the label that toured a lot and gained a bigger fan base (i.e. Hot Water Music, Small Brown Bike, Planes Mistaken For Stars). I think that it helps us a lot more than it hurts us and it's certainly flattering because the bands we get compared to are incredible. I just hope that when people come out to see our band because they see Gainesville, FL on the flyer, they aren't disappointed.

I read an interview once where Matt [Farrell] said he didn't think the artwork to The New Drop Era really reflected the sound of the record. Do you think this time around the artwork is a better representation of what you're putting out there?

We always have a hard time achieving a finished product when it comes to artwork because we do want it to reflect the mood of the record. We wanted something that seemed hopeless but optimistic, or maybe ugly and beautiful at the same time. Something that represented both the ups and the downs of everyday life. I feel like the art fits the lyrical and musical content very well. It's hard to convey a feeling you have in your heart to someone that is putting it down on a piece of paper or creating an image. It's a confusing process. Ryan did and awesome job.

So the record is out, and a tour with Leatherface is on the horizon. Anything else going on with Young Livers we should know about?

Everything is up in the air for us right now. We are wrapping up the writing process of a small batch of songs that will hopefully be recorded and released in the near future.

New songs? Do you have any idea of where or how they will be released?

Ahhâ¦ Well it's a secret what the next release is going to be. I will say that the songs are harder and faster than anything we have done before. We've been talking to our good buddy Bryon at Kiss of Death Records about putting it out. Also, it might take a little convincing but we may do another little something with No Idea around the same time. Neither will be a full length but they will definitely be something fun! Mainly, we are just hoping to tour as much as possible and see the world. We are feeling pretty lucky having just got back from Europe with Bridge and Tunnel and going straight back out on the road in the U.S. with Leatherface. Being in this band is something we feel very passionate about and every moment we get to spend sharing it with others is pretty special.