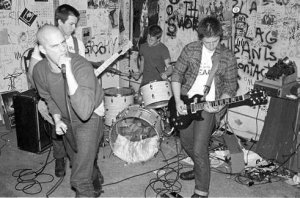 by Brian Shultz Revelation 12 years ago

Revelation Records will be releasing a retrospective on the Detroit hardcore scene of 1979-1985 titled Why Be Something That You're Not. The book is by WFMU DJ Tony Rettman and features interviews from members of Negative Approach, Necros, the Fix, Pagans, Violent Apathy, Bored Youth and L-Seven (not to be confused with L.A.'s L7), as well as those who had a hand in the early hardcore scene, such as Ian MacKaye, Tesco Vee and Dave Stimson.

A preview of the book is available here.

There will also be release shows in Cleveland, Chicago, Detroit, Philadelphia and New York featuring various acts from bill to bill like Negative Approach, Off with Their Heads, Mind Eraser, White Flag and more.