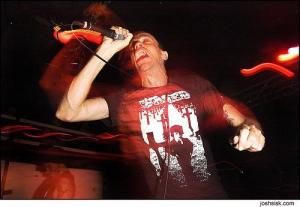 Brawltimore's Pulling Teeth recently announced that they were going to take a break from the band. Punknews Interviewer Matt talked to PT's singer Mike Riley about this, his record labels (Firestarter and Toxic Pop), and his opinions on the hardcore scene in general. You can listen to the extended audio of this interview here.

How are you doing?

Good. So for those here who aren't familiar with Pulling Teeth, how would you describe their sound?

Well, metallic hardcore. Primarily influenced by bands like Integrity, Left For Dead, Slayer, Black Sabbath, with some other influences thrown in there.

And, you have a song called "Dead Is Dead" about being vegetarian. How did you make the decision to become vegetarian?

I've been vegetarian since I was 18, that's 16 years now. Um, I had a bunch of friends who were vegetarian, and that was my first exposure to it all. I was never really one to jump on that bandwagon. I sort-of did my own research about facts about the environment and health and cruelty, things like that. And I try to lead a generally compassionate lifestyle, and I came to the realization that, as humans, as first-world humans, we don't need to kill animals to get by for food or clothing. It's just unnecessary and selfish, so I decided at that point that I was going to go vegetarian. Obviously, music had sort-of an influence, because I think all great music speaks to people on one level or another, and it was actually reading the lyrics to Gorilla Biscuits "Cats and Dogs" that really made the connection for me as far as why do we let animals that we consider "cute and furry", like cats, live in our houses while pigs, and cows, and chickens are slaughtered for food unnecessarily.

I saw your set at the Strike Anywhere show this February and you said that was going to be your last show for a while. Why?

Um, we're just sort-of all working on personal life things for a little while. We've been doing the band, you know, not full-time, but pretty non-stop for the last three years and so, we just decided it was time to… Dom our guitar player, he and his wife are having a kid later this summer in about a month or so, Chris and I are both going back to school. We both kinda put school aside to focus on music and we both want to go back and focus on that. And we all wanted to write another record. So, it's pretty much for the last three months or so we've just been doing a lot of writing and recording and we want our new shows to feature a lot of the new material.

What is the name of the new record?

No name yet. I usually come up with names after all the lyrics are written. You know, try to find a general theme or lyric that jumps out at me.

What do you think of Baltimore's present day hardcore scene?

It's better than it's ever been. I've lived in Baltimore since '94 and when I moved here there were bands like Torn Apart, Bridgewater, and Next Step Up and a few other that were the bands that were doing anything. You know, most of the scene was really focused on Annapolis and Crofton and College Park as far as Maryland goes. Um, and over the years it's finally gotten to the point where Baltimore, you know, bands that are from the city are actually the focus and it's great. Bands actually get out of town like Trapped Under Ice and Ruiner. There are smaller, up-and-coming bands, like Mindset who have blown up over the last year and it's great. They're just great, super-enthusiastic guys. It's exciting to see them carrying the torch for Baltimore hardcore into the future. I don't think Baltimore bands have ever been as talented and hard-working as they are these days.

Some people can't stand hardcore dancers and others love doing it, what are your opinions on hardcore dancing?

I'm all for a hardcore show being a release of tension and sort-of like an all-out, but when it's to the detriment of the people at the show who are just trying to have as good a time as you are, I think it's obnoxious and annoying. All the kung-fu gibberish is so new to me, I'm more of just a freak-out and have a good time kind of guy.

Have Toxic Pop and Firestarter been affected much by illegal downloading?

It's hard to say. I mean, I think all labels, big and small have been affected by it. You know, if there was no mp3, people would have to buy the CD to get the music or tape it off their friend's. Mp3 sales, I think, do well in certain genres of music with people who feel a little more social responsibility to pay for the music or they're just not as aware of the technology or the fact that it's so easy to illegally download music. It's really hard for me to say how much illegal downloading has affected me.

Are you planning any new records for your labels?

Yeah, coming later this summer Toxic Pop will be releasing two LPs. Uh, one for Dead Mechanical and I'm also doing one for Germany's Idle Hands. It's a collection of their two 7"s. They're an amazing band. Kind of Buzzcocks meets pop-punk. Super catchy, super fun. So, I'm super excited for both of those. I'm just waiting for artwork before I can get the ball rolling. I was hoping to have those out for Insubordination Fest at the end of June, but there have been some delays. But, those will be out before the end of the summer. Firestarter is releasing a 7" for a band from Winnipeg called Modern Problems who are like Midwest, indies, hardcore, Necrose, sick kind of stuff.

Videos: The Motorleague: "You Wear Me Down"