Desaparecidos, Cursive, Bright Eyes, Lullaby for the Working Class at Concert For Equality 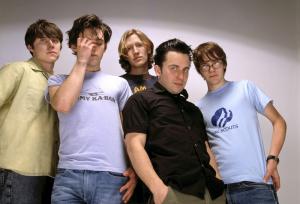 Desaparecidos, the short-lived noisy punk project from Conor Oberst of Bright Eyes, will be reuniting for an upcoming Nebraska immigration-law protest event to be held in Omaha, Nebraska. The band, which also features Denver Dalley of Jade Tree Records act Statistics, released just one album: Read Music / Speak Spanish in 2002.

The show will take place July 31st in Benson and will be part of the Concert for Equality. Labelmates Cursive, Bright Eyes and Lullaby for the Working Class will also be part of the bill. All proceeds go to the ACLU Nebraska's effort to repeal Fremont's Anti-Immigrant Law. Tickets are $20. Tickets will go on-sale on July 10th via this link.

Against Me! to hit Lollapalooza, Europe, Australia

Big D and the Kids Table (Northeast US, Europe)