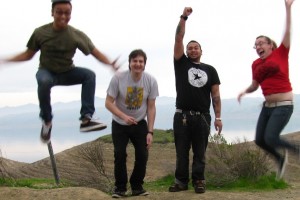 San Jose, CA, pop-punkers The Pillowfights teamed up with Bob from Shinobu to make a music video for the track "Hokay" from their Silver Sprocket debut, Round One, which is available for streaming in its entirety now on the band's punknews.org profile page.

The Pillowfights were joined by Smokejumper from Seattle, WA, at Insubordination Fest and the just completed Escape From Monster Island tour, named after a comment on punknews.org. The Pillowfights and Smokejumper were touring in support of their new split 7" EP, Uh Huh, available now for mail-order from Silver Sprocket. The band's next release is expected to be a split 7" EP with The Measure (SA).