Dead to Me: “Cruel World” (acoustic) 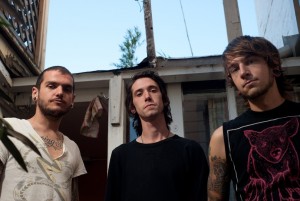 Our camera-havin' friends over at National Underground have posted a video of Dead to Me's Nathan Grice performing "Cruel World" on the streets of New Orleans, LA.

The song originally appeared on the band's 2009 full-length African Elephants. Dead to Me will be performing alongside several of their labelmates at the Fat Wreck CMJ showcase in October.