Tim Kasher of Cursive and The Good Life has announced plans to release a new album under his own name. The record is titled The Game of Monogamy and is due out October 5, 2010 via Saddle Creek. The album was recorded this past January in Whitefish, MT, at SnowGhost Music and in his rental home in the small town. The album is described:

More of an arranged record than any of Kasher's past releases, filled with theatrical arrangements and lush instrumentation to create his own blend of classic pop. Ornamented with strings, harp, oboe, flute, and trombone, among other instruments, the songs vary in sound from vibrant and catchy ("Cold Love," "I'm Afraid I'm Gonna Die Here") to sweeping and grand ("No Fireworks," "Monogamy"), and from hushed and spare ("Strays," "The Prodigal Husband"), to urgent and fraught ("A Grown Man," "Bad, Bad Dreams"). This moody orchestral pop evokes a 1950s-esque, conservative atmosphere, setting the stage for a dilemma that remains thoroughly modern. The protagonist's arc in The Game of Monogamy spans the wide range of distinctly human emotions tangled up around relationships in a starched shirt society. Call it the score for our collective sexual plight: expression routinely becomes repression in the name of romance.

Kasher enlisted Patrick Newbery (trumpet/keys for Cursive; also of Lacona and Head of Femur) to help with the arrangements, the production, and to play on the record. Friends Erin Tate (Minus The Bear) and Matt Maginn (Cursive) also stopped by to add some drum and bass parts, respectively, and members of the Glacier National Symphony were recruited for the classical instrument parts. 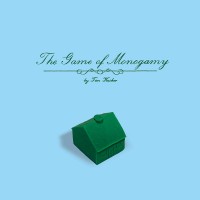 Atlantic/Pacific (ex-Texas is the Reason) joins No Sleep Records

Sublime (with Rome) to record in October