Patrick Kindlon (End of a Year, Self Defense Family) 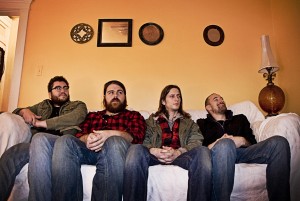 After just wrapping up a tour of the U.S.,End of a Year continues to celebrate their latest release on Deathwish, You Are Beneath Me. Heavily influenced by the Revolution Summer in DC, EOAY continues to offer something a little different in the world of modern hardcore. As a fresh band on Deathwish, vocalist Patrick Kindlon has nothing but positive things to say about their new label since they allow EOAY to be, "weird," as he puts it. He also shared some thoughts with Punknews interviewer Stephanie Thornton about the response to the new album, lyrical inspiration, poking holes in Cruel Hand's condoms, and receiving criticism from Gnarls Barkey fans.

How has the response been for the new album, You are Beneath Me and how does it compare to what you expected to hear?
People seem to like it, more so than we thought they would. The response to the first track has been a little overwhelming. We didnât expect that at all. We thought that would be the alienating track that cuts half the listenership.

How do you feel about the evolution of End of a Yearâs sound up to this point and do you feel you all made conscious decisions to head in any different musical directions while recording You are Beneath Me?
I would have liked to have started our career sounding awesome, but whenever that thought enters my head, I think of the scene in Billy Madison where he gives a speech at his grade school graduation and he acknowledges that some people may think itâs pathetic that heâs just now graduating but, "it was hard for me, so get off my back!" These things take time, I guess, man.

The album title is also the title of your tour blog from your recent US tour - What was the inspiration behind the titles and does it reflect any theme on the album?
Unofficial blog. Weâll call that one the unauthorized blog. Drunk roadie blog. The title of the album came from this notion of the ultimate dismissal. Once you assert something is beneath you and mean it, the thing loses meaning altogether. Iâm interest in everything. I went to the manga store today and bought some freaky Japanese giant mecha shit, just because I realized I know nothing about it. I want to know about everything. Iâll read raver magazines. Iâve been to a Phish show. I follow the news in Africa. Just because the world is interesting and I want to know things. So if I actually think something is beneath my notice, itâs a pretty strong dismissal.

Album reviews have praised your lyrical skills. What do you find as lyrical inspiration and what topics do you explore on this album?
Thatâs a weird trip, the praise the lyrics are getting. Iâm grateful that people connect with the lyrics or just appreciate them, but Iâve got a long way to go. Right now they do what punk lyrics are supposed to do- they express where Iâm at. But eventually Iâd like to express those same ideas in a legitimately eloquent way. Right now itâs like talking to someone on the bus. You get a slice of their deal and maybe something pops out that sticks with you, but itâs not the same as sitting with someone and really hearing their life story. Whenever I write lyrics I like I go and listen to "Whole of the Moon" by the Waterboys or "Dress Sexy at My Funeral" by Smog and I feel challenged. I canât touch that shit.

On this record I devoted a lot of time to boring life talk. What I mean by that is some people only want to sing about the most severe shit they can imagine. Theyâre thinking about Burma when they sing. Iâm thinking about my electric bill. Iâm not saying itâs not serious to me, but my life isnât running from my car to my house in a zigzag because snipers are on me. My life is struggling to live like a normal first world dude.

How much exploration have you done with lyrics throughout your releases?
I used to go for big concepts, but for the past few years Iâve just written about where I was at at that exact second. Typically, I wait until I read something about someone else that touches on how I feel, because sometimes you canât see your own problems. Youâre too close to it. But weâre all real quick to recognize other peopleâs problems. So now when I see that, I think about how itâs similar to my life and suddenly a song is done.

You recently finished up a tour of the US and the tour journal features the band expressing disdain for a lot of the country. What aspects of our country does End of a Year despise the most and how do they correlate with the scenes you encountered and shows you played along the way?
Everyone in this country can joke about the other parts of the country and the stereotypes that we all have about each other, but when it comes down to it, we all assume people think like we think. When you go on tour, youâre reminded thatâs not the case. At all. And to a very large degree, Iâm excited by that. But thereâs a limit. Itâs easy to get burnt out on how dumb people can be. The cute factor dies and all youâre left with is some turd youâre trying desperately not to condescend out of respect for him as a human. What Iâm saying is, we all love these archetypes until we canât escape them. One racist marine who thinks Ragu is high-end Italian food is a fascinating novelty. Being stranded in a 2,000mile stretch of land with only those people is not nearly as charming.

A common motif Iâve noticed in your online postings is to have a sense of humor, and not to be so uptight - this attitude shines through in the craigslist classified ads posted in each city during your spring tour - whose idea was this and what other pranks do you tend to do while touring?
I think that was my idea to actually go through with it, but Iâm sure everyone had a hand in that. Weâre not a prank-heavy band. Ask people who tour with us- weâre not "fun" weâre just funny. So weâre not diving into 4ft pools, while shooting roman candles. We suck balls at that sort of fun. But if weâre sitting around long enough weâll typically make each other laugh with some shit like finding MMMMMF (Male/Male/Male/Male/Male/female) sexual experiences on craigslist. If weâre fun at all, weâre quiet, nerd fun. Weâre not particularly good at pranks, but every time we tour with Cruel Hand we make sure to put holes in their condoms.

Are there any tour plans in the work right now? What is End of a Year up to at the moment as you bask in the glow of the release of your new album?
I think weâre going out again for a short stint in the fall. Maybe go to some of these fests. We love fests. As fans of music we sort of hate them, but as a band theyâre fun as hell. You play and then wander around. You donât actually have to be anywhere. Thatâs relaxing. Weâre recording again. Iâve got to finish vocals on one 7" then we start in on another. Weâve got some plans for the winter that will start to really close in on what I want from this whole band experience. Weâve gotten to do some of the weird shit weâve wanted to do, but some of the plans this winter will push that commitment to weird shit to the next level.

You signed to Deathwish last year. How have they been treating you so far?
They let us be weird. I canât really ask much more of a label than that. I call them up once a week and pitch them an idea for a record and they never say, "no." They may say, "youâre giving us ulcers, WHY do you want Roger Clemens to sing on your record? Is it really necessary?" But never, "no."

A recent post on your blog addresses giving and receiving criticism as far as music, success, and how it relates to goals. Whose criticism are you most likely to value? Does it often have an effect on what End of a Year chooses to do?
I do my best not to dismiss criticism right out the gate. Some people create that brick wall and insulate their feelings, shitting on anyone who criticizes them. I can understand in certain situations. A few records ago, someone gave us a poor review so I click on his profile on the site. His favorite record of the year was Gnarls Barkley. What am I supposed to do for that dude? He shouldnât be allowed to listen to music, nevermind review it. So itâs easy to just outright dismiss that bit of criticism. But I try not to do that, because even a broken clock is right twice a day. If Hitler told you to brush your teeth would you not do it because he told you to and heâs a shithead? So youâve gotta at least hear people out. Sometimes they may be right for the wrong reasons, but that doesnât change the fact that theyâre right. Like if some shithead criticizes my voice, itâs easy for me to deflect it and say, "Oh, that dude must not come from a punk background, he doesnât get it." But instead of doing that, maybe itâs worthwhile to hear it out and reflect on it. Is this dude really a clueless idiot with no understanding of subculture? Probably. But that doesnât change the fact that my voice is really bad.

What sort of goals do you hold for End of a Year at this point?
Iâd like to make music well into my "adult" years. Punk music kicks you out after awhile. I read people on messageboards shit talk people involved in punk music by saying, "Dude is practically 30!" As if age is an insult or the dude has less of a right to be there. But that seems to be the way it is. A lot of similarities between hardcore and hip hop. Both fear age. They either want to see you perform only your old material or they want you to disappear entirely so they can pretend they rediscovered you and talk about it on a messageboard. So eventually weâll be ushered out of the thing weâve been around for a long minute doing and I donât know where that will put us. But thatâs the great thing about being a band that has never gotten big- who we sell to has never been a concern. Weâll never have a "classic" period that people get hung up on. Weâre always making things you can like or not.

My goal is to pursue every weird opportunity and collaboration available to us. I want records of ours that people donât like, but they stick with us until the next one because they know weâre good and they donât have to like our entire catalog. I want an actual life in music. I almost said career, but career has a certain connotation for some people. Iâm talking about actually expressing yourself as an adult. Something not everyone gets. Ever meet those people who are done? They put down their instrument with no intent of ever picking it up again. Iâm looking for the opposite of that. I want to keep expressing myself until Iâve made something I feel canât be topped. Since that may not happen in this lifetime, I keep it moving towards the next.