As the quintessential band of the pop-punk genre, Screeching Weasel possess a sound and style as recognizable as that of the Ramones, Sex Pistols, or even The Clash. We've been retooling Television City Dream with Ben Weasel to give the original release a total face lift. The album is getting a full makeover: re-mix, re-mastering, and updated art. Most intriguing is that there were 5 songs from the TVCD session that were not included with the original release, but they are now back where they belong, re-sequenced into a 20-song opus and set to be re-released. 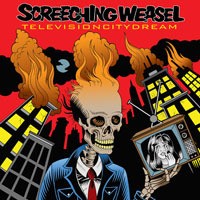