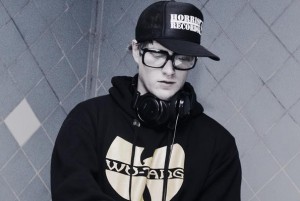 With all the genre blending that happens in punk it's no surprise that as the years pass hip-hop would gain an even stronger following with the punk crowd.MC Lars continues the trend with his self-stylized "post-punk laptop rap." Although he's a hip-hop artist Lars has sampled Fugazi, worked with Gabe Saporta and disses Gerard Way. And that was all from his last album. The emcee sat down with interviewer Alex Eschbach to discuss his follow-up to This Gigantic Robot Kills, Herman Melville, rapping in a library and the Insane Clown Posse.

As the individual who created "post-punk laptop rap," would you mind defining what the genre is exactly?
I'd heard the term "post rap" in 2003 and I thought I'd twist it and add punk and laptop into the mix. The name kind of stuck, but when I was doing library shows last summer it was funny to hear librarians introduce me and try to explain what "post-punk" means to a room full of old ladies and little kids.

You started out in a punk band. What made you decide to focus on hip-hop full time instead?
I was tired of lugging mad gear into venues - hip-hop was simpler and easier to tour on. So I thought I'd stick around for seven years and see what happens!

You've opened for and toured with a wide variety of artists. Who are you still clamoring to tour with, both on the hip-hop and punk side?
Hip-hop tours are more fun but I wouldn't say no to a tour with NOFX.

Youâve rapped about Shakespeare, Melville and Poe. How do you decided which literary classics to turn into rap songs?
Rap is poetry and poetry is rap. I like to make that connection for kids by "flipping" old school stuff. If the piece is cool and will translate into a modern context then I go for it! I did a library tour this summer and it was awesome.

How exactly did the library shows work? Was there a warning posted at the entrance, "Warning: Things May Get Rowdy?"
I do a PowerPoint lecture on the history of hip-hop and perform certain songs as examples to illustrate the points I make. We talk about rhyme patterns and by the end of the lecture we all write a song together and I invite the kids to come up and rap it with me on the mic. I'm doing more soon!

What are some of your favorite releases from this year?
Yelawolf and Die Antwoord are my favorite new acts! They are so dope.

As far as side projects go, you've already released a collection of your comic 27th Street in a book as well as a book of poems. Are there any more plans for printed collections of your work?
I need to do more comics but yes!!

Being a white hip-hop artist, do you think that makes you more accessible or dismissed as, "just another white rapper?"
It has made me more marketable to a certain demographic but ultimately skin color is not as important as it once was with hip-hop.

What demographic would that be exactly?
White people?? I have no idea. I like to think that my music appeals to everyone but I can't front and say that some kids listen to me as a way to feel like hip-hop speaks to them if you know what I mean.

Currently youâre working on a new album. As someone from the Bay area, why did you decide to pack your bags and travel all the way to the East Coast to record Lars Attacks?
Some of my favorite musicians are in Brooklyn and it's helped me get focused. Every time I come back to New York I'm inspired to write more hits so there you go!

What can we expect from Lars Attacks?
A return to the basics and a new flow for each song.

Will it be a horde of guest appearances like This Gigantic Robot Kills?
Actually quite the opposite - I am trying to have more ownership and agency with this project.

Since the album is going to have less guest artists and more of a return to basics, can we expect the album to contain less punk elements and more standard hip-hop stylings like your split with k.flay?
Exactly! But I am still hoping to finish this straight-up thrash track with Zebrahead.

Care to share any subject matter you're going to rapping about on the upcoming album?
Everything from circumcision to bro culture to vikings!

Is there a tentative release date for the album?
March 2011.

Youâve been an unapologetic ICP fan. Iâm curious to know what you thought about the song "Miracles" (specifically the lyrical content), their fan base and the attack of Tila Tequila at the Gathering of the Juggalos?
They do a "serious" song every album, but they've never made a video for it. "Miracles" is a fun explanation of how the universe is still a mysterious place even when we have science - the whole spiritual dimension to ICP is really inspirational and awesome to me. They made me want to rap when I first saw them in concert in 1998. Tila Tequila is an inauthentic performer who reflects everything ICP is NOT (not writing her own music, clichÃ©, famous for being famous) and although I don't advocate female violence I understand what went down.

When This Gigantic Robot Kills was released you really started to blow up. I saw your name popping up in a lot of places I wouldnât expect. What are your ultimate goals for yourself as an artist?
To make music I love and inspire people to create instead of consume and to question what they're told. Punk rock baby!