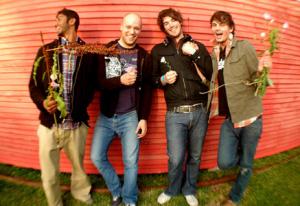 Contributed by fattony, Posted by Aubin Paul Fearless 12 years ago

Gatsbys American Dream has announced via Twitter that they are reuniting. The band recently performed an impromptu reunion at a Forgive Durden show in Seattle where Gatsbys side projects Places And Numbers and Princess Dinosaur were openers.

Though never officially announced, the band has been on hiatus since 2006, shortly after the release of their self-titled album. In the years since, the members have all remained active, starting a myriad of side projects including Kay Kay and His Weathered Underground, Wild Orchid Children, Princess Dinosaur, Places And Numbers, TickTockMan, RedRedBlue, Keith Ledger, and Search/Rescue. The band noted that the active side projects, specifically Kay Kay and Wild Orchid Children, will not be ending. Wild Orchid Children and Places And Numbers both have pending full-length releases on Equal Vision Records.