Win tickets to the Flatliners, Menzingers, Fake Problems and Mockingbird Wish Me Luck 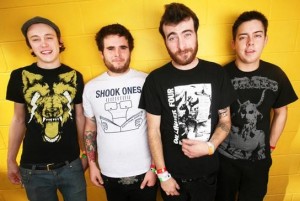 If there is a single tour that can sum up the awesome new records we've seen in 2010, this might be it. Still high on the release of their incredibly well received new record, The Flatliners will hit the road in Quebec and Ontario this December and they're taking Fake Problems and The Menzingers along with them. The forces of Cavalcade, Real Ghosts Caught on Tape and Chamberlain Waits will combine into something truly epic. Not only are three of Punknews' best received acts touring together, but they're taking young Canuck upstarts Mockingbird Wish Me Luck under their wing and showing them the ropes.

This is a spectacular tour and we're thrilled to partner up with Dine Alone Records to give away some tickets to it.

The Prizes 10 winners will receive: