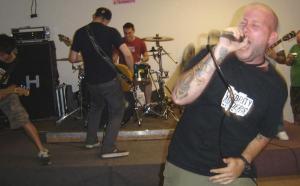 Givers/Takers is the band's follow-up to 2009's Blind Faith 7" EP (Iron Pier) and their first full-length since 2007's Homefront (Revelation). The album was mixed and mastered by Propgandhi's Chris Hannah, who has done similar work for records by F.Y.P. and Malefaction. A physical release is expected later this year via Underground CommuniquÃ©.

Music: End of a Year: "Wineblooms"