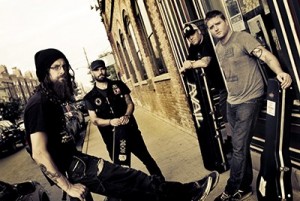 Smoke Or Fire's narrative isn't particularly idiosyncratic or defining. Indeed, the band's story describing the ascent from small, local band - paying their dues and putting in the leg work - to a relatively well known staple in the punk community resembles the story of so many groups to come before them and, will most definitely prove, those that come after. However, one element that does set the band apart from its peers (especially those artists citing origins in that gritty, melodic, post-hardcore sound ostensibly from Richmond, VA) is the unadulterated honesty that reveals itself over and over within Smoke or Fire's work. Most notably compelled and presented by lead singer/guitarist Joe McMahon's lyrics, but equally demonstrated within the musical context itself, Smoke or Fire has a penchant for caring about something – an issue, a particular relationship, an idea – and absolutely throwing its entire self into it. The group is riding on the heels of their third proper full-length – The Speakeasy – and, after a brief break up, experiencing the reinvigorated atmosphere of playing music together again. Punknews contributor Matthew Bentel recently spoke with McMahon over the phone after he returned from a personal trip abroad. The amiable conversation that follows addresses the new record, the group's primordial intentions, and how to spend time post-break up.

The new record, The Speakeasy, has been out for [about two months] now. How has the reception been?
Itâs been really good. I mean just from hearing people talk about it, luckily it was kind of out before the shows we did. Fat [Wreck Chords] has the record. So luckily we had a chance to sell it before it was out in stores. A lot of people headed down to the Fest and saw us and it seemed like people were enjoying it.

Iâve been reading some divergent reviews and comments online; some saying this is the record that shows you guys have found yourselves, others saying its careless and contrived.
I mean, I think- you know, the reviews Iâve read- I donât read them, I donât actively go out and read them. But the ones I have, a lot of them have been positive but some have said itâs boring. The thing is, we went into the studio saying this is the record we wanted to make and this is what weâre going to do. Everyoneâs going to have their opinions, and some arenât going to like it, but weâre really happy with the record.

The Speakeasy definitely alters and evolves the sound youâve been crafting over the years. It is more rock-oriented, traditionally structured, less vocal melody. Any conscious reasons behind this or just how it came together?
I think it has a lot to do with where we were as people in the band. With this last record, This Sinking Ship, friends of ours in bands, they loved that record. We had been out on the road for Above The City, so that was the theme of that record [ Sinking]: constantly traveling, going to all these new places. For this record, we had over a year off, so we had time to sit down and think. Everything was much more thought out than in the past. We wanted to take everything and make it really sound good. We just wanted to make a record that we wanted to listen to, doing things we wanted, about where we were as people.

The widely successful Above The City featured mostly two-minute songs that hit the listener hard and fast. The last two records see the band expanding the song template a bit. Two minutes not enough anymore?
[laughs] In some ways, I think, you try to challenge yourself musically. We still like writing two minute punk songs, but sometimes it takes a bit longer to get something across to people. We donât do any of that consciously. We kind of just write the song and play it and play it, and you go through the process of trimming the fat. A lot of the songs that were short in the past, it was like we were trimming things- we were never a band that thought you needed to repeat a chorus, and things likes that. Now weâve got a lot more songs closer to three minutes than two minutes, but writing wise you try to push yourself a little more.

Itâs called The Speakeasy. The title seems intimately related to the content of the album, in terms of the different issues addressed separately and a larger metaphor: the notion that the personal is political; referring to the conflict in our lives. Would you say this was the intention?
Yeah, I think going into it, with The Speakeasy theme, it was going back to- looking back at everything weâve done at this point. If this is the last thing we do, we want it to be the best thing. But the idea of The Speakeasy, its about a couple things. One theme is being seventeen, eighteen years old, going to house shows, cops showing up, underage drinking going on. But it was like this defiant act. So it was this theme that you canât stop it, its always going to go on, weâre always going to be going to these shows. The other theme was- I donât know if itâs a romantic idea, but this idea about living back then, in an older time, wanting to play music in a different time period.

The song "Shotgun," in a sense, is one of the your traditional songs about friendship and the supportive elements it provides. Though, it takes a peculiar approach, with you singing, "As for me, Iâll be right here. A shotgun and a rocking chair." Is there a story or moment that promoted you writing this song?
Yeah, that partâ¦that song is kind of- I have friends that I worry about a lot, as far as things they kind of abuse. Iâve lost friends due to that stuff. Like the song "Cryinâ Shame"[on Above The City] is about my friend I lost to heroin. But there are some friends I care about that I canât seem to get through to. As much as I love drinking, Iâve settled down a lot. And that line to me kind of says you can call me this boring old guy in a rocking chair, you know, with a family but Iâm not going to be the one drunk driving. I became frustrated in trying to get through to them. I didnât know what else to do, so I was kind of like, okay, well I can write a song about it. And that is sort of the reason behind that.

Speaking of song meanings, I read that the song "Utah" is about a guy from Chicago named Justin. If this is, in fact, true, what is your relationship with him and why did you write a song about him?
Its one of the songs we had when- you know working titles? Well when we go into the studio with working titles, that we havenât come up with titles for, so we had three or four songs like that. And that was the one song that we didnât have a title for still when we finished recording, and I said to Jeremy, "if you want to name the song, you should." That song was personal for the band. And this kid Justin, who is just a really great kid and has helped us out a lot, well heâs friends with the Alkaline Trio, and they gave him the name Utah. And we never called him that or anything, but it [the song] was named for him.

In the downtime between Smoke or Fire albums, you did a little of your own recording and touring. How was that experience?
Uh, it was really different. It was really, really different. The first one I did was, actually, right after we split. And it was supposed to be me and Jeremy touring to Harvest of Hope and back to Richmond, but we split right after the NOFX tour. So I ended up renting a car. It was just me, a rental car, my acoustic guitar. So, in a way, it was pretty amazing, me and a map. You get pretty lonely but I just listened to NPR every day. I mean, I never wanted to be a solo act, and I like playing acoustic shows, but its pretty different. Itâs nice to tour in a band, to have the guys there to drink beers with. And youâre not alone in a rental car.

Do you plan on pursuing your solo endeavors more in the future? Or is there a renewed energy in the Smoke or Fire camp that is overshadowing any personal desires?
Iâm caught up in the air. I donât know. I play music at home and I write music for film-

Wait, you write music for film?
Yeah. When the band broke up I started writing music for film just to stay active and pay the bills. It was actually pretty rewarding. I grew up playing different music, so it was fun to do that, to play jazz or rock or just other types of music. Like, Smoke or Fire is my baby but this [music for film] is music for musicâs sake. It was nice to be playing music and not feeling like your heart is it. Like, I throw so much of myself in Smoke or Fire, and to play music that isnât so emotionally full, that your not so invested in, itâs a nice break.

So, on that side that fulfills my need for music. I donât see myself as a solo artist or doing that. I know I want to make a solo record but I donât know how much interest I have in that right now. Like the stuff Iâve done was kind of done accidentally. The stuff on that split with Brendan Kelly [Wasted Potential] I recorded right before my first solo tour was cause of an idea my friend had cause I had nothing of my own at shows, so as something to sell. So we just sat at my home drinking beers and recording those songs. So if I do do it, it will be something more planned out and more thought out.

Music: Gracer: "An Island in the Dark"