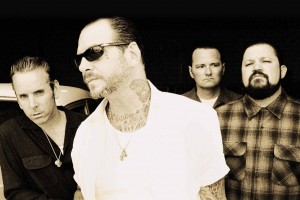 Social Distortion have launched a stream of their new album, Hard Times and Nursery Rhymes. The band is promising to lower the pre-order price of the album on Amazon by $1 for every 100,000 streams recorded (up to 500,000 total).

The band is also planning to perform on popular late-night talk show CONAN on January 18 (11/10PM CT) on the official release date of the album. Hard Times and Nursery Rhymes is due out January 18, 2011 via Epitaph Records.