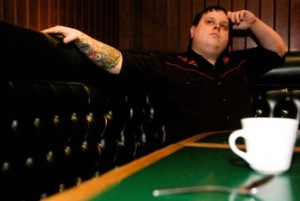 The new single from Bloomington Indiana's Austin Lucas, titled "Thunder Rail," arrives in stores today via iTunes, Amazon, Spotify, and the Last Chance Records website. While the release date for the alt-country singer-songwriter's new album, A New Home in the Old World, has not been set it can be expected by May. The new recordings follow up 2009's Somebody Loves You.

Lucas will release the album in Europe this April before a European tour kicks off in May. He'll also be playing SXSW shows with Drag The River and Joey Cape. Furthermore he's confirmed a slot on Willie Nelson's upcoming Country Throwdown tour. The dates Lucas will play on that tour have not yet been announced.

Streams: The Reaganomics: 'Lower the Bar'