Big D and the Kids Table have announced a new album, For the Damned, The Dumb & The Delirious, set for release on July 5, 2011. It is the follow-up to Fluent in Stroll which was released in 2009. The label promises "blasting punk, old school thrash, adrenalized ska with the good old traditional Boston bar room, pint slamming anthems."

The band has posted the first song from the album as well as the art and track listing. 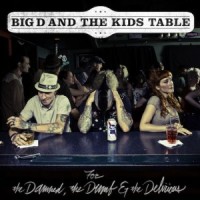