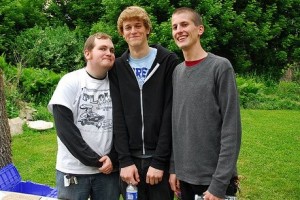 Spraynard hail from the magical city of West Chester, PA.. Mimi Gallagher from the band NONA and John Crodian from the band Failed Attempts At Facial Hair got a chance to sit down with the Pat Graham (guitar/vocals) right before they left for a 2 month journey across the US of A in support of their Asian Man records debut release FUNTITLED. So far they've managed to break down twice and miss one show on the first weekend. Not such a bad start.

Before we begin, can you please remind everyone of your bassist's name?
Mark "Tall, Mark and Handsome" Dickinson.

You are known for referencing/name dropping your town every chance you get. What gives?
One of the most appealing parts of punk rock to us is the sense of community. It's not so much the actual town of West Chester that we dedicate ourselves to, but the people involved in the scene. We have so many close friends devoting their time and patience to ensuring that West Chester is as rad as we can make it. Being surrounded by thriving scenes such as Philly and the Lehigh Valley gives us incentive to build something just as prevalent in the place we grew up in. Also Bam rule. ROFL.

How do you think your home town of West Chester has changed since you started Spraynard, and how is it different from when you were playing in previous bands?
When we were in high school, the West Chester scene was definitely more crowded, but the kids involved seemed less interested in what punk represented and more interested in curing their boredom. There is a time and a place for chilling to the max, but it was hard to take away a sense of togetherness from those shows. Since we've started Spraynard, a core group of people have begun to involve themselves in the scene and have realized that we have something really special in our town. We met a lot of new people playing weird shows we wouldn't normally play in our old bands and as a result have established a really positive foundation of vibes.

When you started Spraynard, did you make a conscious decision/effort to make it different from your past musical projects? If so, what sort of ideas did you build Spraynard on?
We wanted Spraynard to be so fun. At first it was fun, now we think it's more fun.

Pat- you have been quoted on saying that your first AIM screen name was "Im Irish 69". It seems like you took a lot of pride in your heritage at such a young age. What role, if any, does your heritage play in your song writing today?
First off, it was imirish29. I don't think I knew what 69 meant when I was that young. But I did REALLY like the Dropkick Murphys. I had like 6 of their shirts. As for the songwriting, the song "Damn You, A Box" seems like it's about death or some shit, but it's really about the Irish potato famine.

Challenge: Briefly describe what gear you use without sounding like a boring dork
We use one guitar, one bass, one drum, a few hot mics and a boss DJ. "Spread ya love and fly" - Ziggy Marley

You are also known for playing very short sets. Will the increase of songs in your discography effect the length of your sets at all? Please take this time to express your philosophy on short sets and short set-up times/break-down times.
Our set times have increased a bit over the last year or so, but this is only due to the fact that we are funnier every day and feel the need to crack many-a-joke during our sets. To be real though, short sets are key. We could give you a long winded answer about all bands having equal importance and therefor sharing equal set times regardless of back catalogue, but in the end, watching any band for more than twenty minutes can be super boring. I think we all have a special place in our hearts for thrash bands that set up their stuff, tear through ten songs in ten minutes and then leave you blown away and wanting more, so we'll do what we can to emulate that but still write sappy pop punk songs.

If you guys were ACTUALLY famous and not just punknews famous, who do you think would get the most requests for autographs? I think it would be Mark because he rides a motorcycle and has the nicest hair.
We've been mulling this question over in our heads for a long time now considering we are quickly approaching that status. We have all bought personal pens to sign assorted items with. Pat bought a G2, Mark bought a UniBall Elite and Dos bought a Ticonderoga #2 Pencil (best kind of pencil). That's it

. Stock question for lack of a better question: Favorite Spraynard show ever?
Our friend Skankin' Marie puts on shows at her house in Chadds Ford, PA from time to time. Within our first few months as a band, we were asked to play there and we all remember being surprised there was something going down so close to West Chester. As we pulled up, there was about thirty kids we had never even met who were so ready to welcome us. We have never felt such an immediate connection to a group of kids, and since then we have all become close friends. That show will always stick with us as a reminder of what this music is capable of.

You three are funny. Your song titles are funny, you have funny stage banter, your album art is funny, and you look really funny. How important do you think it is to not take yourself too seriously when playing in a band?
Punk rock is a very serious thing to us. Everything attached to it is so important to us and we wouldn't trade it away for anything. That being said, we also do our best to be as honest and sincere as we can. Coupled with that "realness" is the fact that we search for humor in everything. It's partly a coping mechanism to all the fucked up stuff going on in the world and partly a need to laugh and enjoy life. We've all learned an important lesson over the past few years and especially recently, that life is too short. Shit's going to go wrong; but if you're not getting rad whenever you possibly can, you're not doing it right.