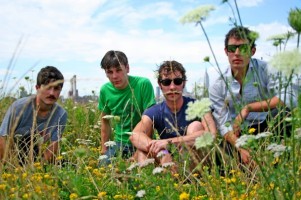 Atlanta, GA's Black Lips recently stopped the Daytrotter studio to record a session. The band performed "Dumpster Diving," "Time" and "Go Out and Get It" from their new album Arabia Mountain as well as "Make It," which was originally released on a split 7" with Dirtbombs.

Music: The Wonder Years: 'Suburbia I've Given You All and Now I'm Nothing'