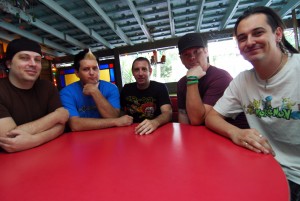 Contributed by LanceUppercut, Posted by Aubin Paul Sleep It Off Music 9 years ago

Less Than Jake has released their recently recorded new EP, Greetings From Less Than Jake. The 5-song disc is the third (new) release on the band's own Sleep It Off Records with last year's TV/EP and 2008's GNV FLA. The label also played host to reissues and live recordings. Greetings From… was produced and recorded by Roger Lima at The Moathouse and mixed and mastered by Stephen Egerton. The album is available digitally through their official website or at their merch table at Warped Tour.

The band has released a song from the EP, "Goodbye, Mr. Personality," which you can find here.