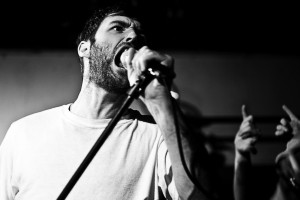 by Brian Shultz Matador 11 years ago

Ceremony's farewell effort for Bridge Nine has been jointly announced, as well: Covers, a six-song EP of such that will include takes on Urban Waste ("Public Opinion"), Pixies ("Nimrod's Son"), Crisis ("Holocaust"), Eddie and the Subtitles ("American Society"), Vile ("5 to 10″) and Wire ("Pink Flag"). No release date was mentioned, but pre-orders are expected shortly.

The band plays the House of Vans in Greenpoint, Brooklyn, NY tonight alongside No Age, HEALTH and Cults. They also have a few other U.S. dates planned, as well as a European tour following.

UPDATE (2:09 p.m. EST): The EP has been given a proper release date of August 9. You can check out the cover art on its release page.

Tours: No Doubt talks to Rolling Stone about new album