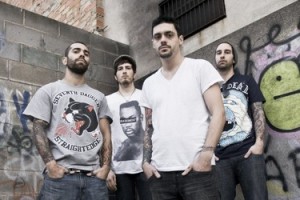 Long Island's This Is Hell have entered Killingsworth Studio in Valley Village, CA with producer, Tomas Costanza, to begin recording the band's fourth studio album and follow up to 2010's, Weight of the World. The yet-to-be-titled full-length will see an early October release on Rise Records.

After the band wraps up recording they will be hitting the road with Comeback Kid and The Chariot who are all supporting Underoath's headlining tour.