Panic at the Disco, Blaqk Audio, A Place to Bury Strangers on Arkham City soundtrack

by Aubin Paul Games and Technology 11 years ago

The track listing has been announced for the upcoming soundtrack to Batman: Arkham City. The game is due out October 18th and the soundtrack will be released on October 4, 2011. The album will feature new material inspired by Batman and feature Panic At The Disco, Coheed and Cambria, The Duke Spirit, Black Rebel Motorcycle Club, Blaqk Audio, The Raveonettes, (Crosses), The Damned Things, Daughtry, The Boxer Rebellion, Serj Tankian and A Place to Bury Strangers. Coheed's Claudio Sanchez said:

I write in a very conceptual format with the stories that surround Coheed and Cambria, but Batman has a much larger, defined history and rules that go along with it. My goal was to find universal themes from Batman's existing history to help give the lyrics legs and dimension so that the song could live within that world. 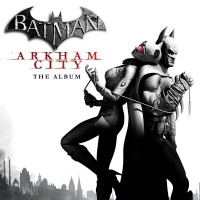 The Dopamines working on new material