Contributed by joltman, Posted by Aubin Paul The Misfits 9 years ago

The Misfits have detailed their forthcoming album, The Devil's Rain. It's due out on October 4, 2011 and is their first album of original material in ten years. Their last studio album was a collection of covers titled Project 1950 and released in 2003. Before that, they released the original album Famous Monsters in 1999 on Roadrunner Records. It reunites the band with Famous Monsters producer Ed Stasium who also recorded The Ramones' Road to Ruin and Too Tough to Die. 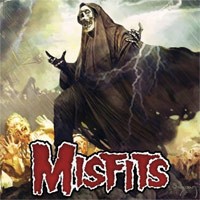