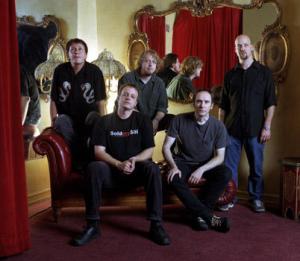 Self-perpetuated rumors of Guided by Voices' demise have been greatly exaggerated, as the band has announced plans to release a new album. The record is titled Let's Go Eat The Factory and is due out January 1, 2012 via a TBA label; Punknews.org can confirm that GBV's most recent home Matador Records will not be releasing the album. The track listing can be found by clicking below.

Once out, Let's Go Eat The Factory will be the group's first new album since 2004's Half Smiles of the Decomposed and their first with their "classic" lineup of Robert Pollard, Tobin Sprout, Greg Demos, Mitch Mitchell and Kevin Fennell since 1996's Under the Bushes Under the Stars.

01 Laundry and Lasers
02 The Head
03 Doughnut for a Snowman
04 Spiderfighter
05 Hang Mr. Kite
06 God Loves Us
07 The Unsinkable Fats Domino
08 Who Invented the Sun
09 The Big Hat and Toy Show
10 Imperial Racehorsing
11 How I Met My Mother
12 Waves
13 My Europa
14 Chocolate Boy
15 The Things That Never Need
16 Either Nelson
17 Cyclone Utilities (Remember Your Birthday)
18 Old Bones
19 Go Rolling Home
20 The Room Taking Shape
21 We Won't Apologize for the Human Race

Streams: Gameday Regulars: '...But it's Hell in the Hallway' (Exclusive)