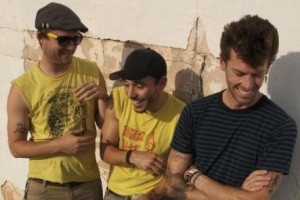 With a brand new record (Agitations), signing to Fat Wreck Chords, and a never ending tour schedule, Reno, Nevada's Cobra Skulls are a band constantly on the move with zero plans of stopping. Punknews editor, Brittany Strummer, recently sat down with lead singer, Devin Peralta, to discuss their hectic tour schedule, their brand new record, Brittany's lack of knowledge of Nothington, and how they won the adoration and acceptance of the infamous Punknews commenters. Not to mention guitarist, Adam Beck, adding his two cents where applicable.

Be sure to catch Cobra Skulls on their fall tour with Nothington and click here for a chance to win some pretty rad stuff from the band.

You guys just started your tour with former label-mates, Nothington, a couple days ago. How is that going? Devin:You know what? Weâve never actually been "label-mates". Isnât that funny?
Adam: They were on our old label after we were so we never were the same.

(laughs) Devin: Itâs great. This is our third show with Nothington and weâre both here on time which is good.
Adam: Kind of on time!
Devin: (laughs) So, thatâs not bad. We did like a week, 8 shows, I think, before Nothington came and met up with us in Reno and that week was pretty fun. All the shows were good except for Vancouver which we didnât make into becauseâ¦ how do I say this without pointing fingers? The show wasnât booked properly. They have weird exemption laws, whatever that means in Canada. So, you canât play at a place where their primary purpose is to sell liquor or beer. So if anyone from Vancouver hears this, who wanted to go to that show because I know people traveled a little bit to see that show, we were turned around at the border because the show was booked at a bar and that was the issue. And we were told it would be fine because it was, like, rented out. I mean, try telling that to customs officials. So, we got turned around which was a bummer but every other show has been awesome.

Agitations is your second release on Fat Wreck Chords but your first full-length on Fat Wreck Chords. How is recording with Fat different from recording with Red Scare? Devin: We just had more time and a bigger budget to record. So there was no pressure or, "We have to finish this by this time". Even though we were still trying to maintain some sort of schedule in the recording studio. Tobeâs awesome, Red Scareâs awesome but there was just a little more provided for us to record without stressing out about money and time.

Thereâs a lot of political themes in your songs. Do you do any sort of activism outside of music? Devin: Well, I have. I havenât lately just because I havenât had much time outside of writing, touring, and working between tours to try and pay the bills. I worked for the ACLU for like 4 months. So, that was you know, reallyâ¦

Did you enjoy that? Devin: It was pretty rewarding but it was really a hard job because you have to knock on peopleâs doors and talk to people who half the time really donât want anything to do with you, and trying to get people to contribute to an organization they may or may not like. So, it was just kind of an interesting experience. I didnât do it for that long but I donât think many people do. Itâs more like a thing people do on the side; not even a job. Half the people that were there were people who werenât lawyers yet, in law school, and were doing that as a project. Me, I was doing it as my actual job but at the same time I chose to do it because I was interested in doing something with an activist role. So, I worked for ACLU for 4 months but not since then I havenât really done much besides write lyrics.

Is that what "Rebel Fate" was based off of? Devin: Yeah.

I saw you guys three times last year and will most likely see you three times this year. You guys are always touring. Does that take a toll on you at all or do you prefer it? Devin: I like touring and it definitely takes a toll even though I like touring. Sometimes you just want to take a break for a few days but I feel like thereâs humps you get over and get back in the flow. So thereâs definitely times where I really wish I didnât have 2 months of straight touring ahead of us but then you get through maybe a rough patch and then youâre fine.

Does she (points to Devinâs dog, Bella) like it? Devin: I think she likes it because she hops in the van every time weâre getting ready to go. So, she gets in the van as soon as she sees us packing up and will not leave and just stays in here. So, I guess she likes it.
Adam: She just hates being alone.
Devin: (laughs) Yeah. She has separation anxiety from me. So, if she knows Iâm leaving she wants to go.

Going back to Agitations, is that Fat Mike I hear on "On and On"â¦? Devin: (laughs) No!

Who is that?! Devin: Thatâs Chris from Nothington!
Adam: Fun? Huh?
Devin: Yeah, heâs the only guest vocal on the album.
Adam: I did some guest work on it too.

Oh, did you? You do a lot of guest work donât you? Adam: They keep coming back to me for some reason.

I noticed on Agitations that there isnât any songs in Spanish as compared to previous songs where you break out in Spanish or a whole song will be in Spanish. Did you not feel you wanted to do a song in Spanish? Devin: Well, people have called us a bilingual band when weâre really not a bilingual band. Iâm the only one who speaks Spanish in the band. Only a few songs have Spanish and I only put Spanish in those songs because I felt like they merited to have Spanish. It made sense to write a song in Spanish about Che Guevara t-shirts ("Hasta Los Cobra Skulls"). One song had Spanish in it because I felt like it needed Spanish for that one verse("Thicker Than Water"). I just didnât feel like I needed to write anything in Spanish for this album. I donât feel like we need to be called a bilingual punk band because thereâs other bands out there that are real bilingual punk bands and if they heard that we were being called a bilingual punk band they would think, I donât know, that thatâs pretty silly.

Agitations is a bit different from your previous work. Was there anything that inspired you to try anything new on Agitations? Devin: Like different bands?

Yeah! Devin: No. One thing I think I consciously wanted to do was write more concise songs that were not experimental, really, in anyway. Although thereâs different types of songs on there but I donât think I was influenced by anything new or different on this one. I just wanted to write songs that were fun to play.

I donât know if you noticed but when AbsolutePunk released the stream of Agitations we did a story on Punknews. Itâs really rare that the commenters agree with such a positive reception. Devin: I did notice that actually and I mentioned that, I think, yesterday. There werenât that many comments. It was really weird because there werenât any condescending or negative comments at all. Like there wasnât even ONE!

(Laughs) Yeah, I thought it was weird. Devin: Someone actually commented on how it was weird and made a fake comment. So, thatâs weird but yeah, thatâs cool. Hopefully that means that people like it but maybe people just donât care.

I think the reason there wasnât that many comments on it is because earlier in the day there was a story about "Solastalgia" streaming on Rolling Stone. Devin: Oh, ok! Yeah.

Since you guys are in Denver tonight can we expect to hear "Cobra and the Manwhore"? Devin: Probably. Yeah.