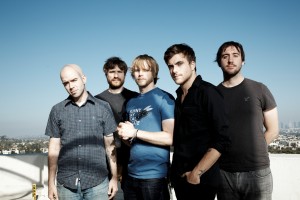 With three full length records and more than a few EP's under their belt, Circa Survive know a thing or two about the music industry. Primed to finish writing and recording their fourth full length record, the Philadelphia, Pennsylvania based quintet are back on the road doing what they love, building energy for their upcoming writing and recording sessions in the process.

Mark Millard caught up with the band's critically acclaimed vocalist Anthony Green to chat about their current run of shows, the writing process for their upcoming record and an important lesson he's holding close to him this time around.

First off, catch us up, Anthony. How was the summer and what has Circa Survive been up to?
The summer was amazing. We started writing at the beginning of the summer and the last writing cycle that we had was pretty treturous as far as personal issues and dealing with some stuff; so we were a little nervous to see how it was gonna go and it couldn't have gone better. Everybody was in a really good mental state and we were able to be really productive in a short period of time, which is not something that we've really done before. We take such a long time to make headway in the area that everyone's happy with, so that was really awesome. And I got to spend a lot of time with my family which was great; my wife and I tried to go to the beach as often as we could. It was just a great summer and we're super pumped to play some of these new songs live and feel them out; just see how they feel to play them on stage.

So it's safe to say we can expect to hear some new songs on this tour?
Yeah. We're gonna try out as many new songs as we can.

Let's talk about the tour that kicks off tonight in Chameleon. Obviously you guys have already done your Blue Sky Noise support tours. What's the mentality with shows like these prior to heading back into the studio?

I think when we look back on the tours we've done in the past year, we're trying to hit some of the places we may have neglected. The other thing is you get some sort of energy from being on tour; when you're home for a couple of months, you sort of forget about that. Just focusing on writing keeps you in sort of a limited mentality, and when you come home from being on tour you have this sort of intense energy and it's right on the tip of your tongue. When you're home writing for a while, it tends to get lost. So I feel like this is just kind of like kicking the dust off of everything and so it's the real reason why all that work this summer was necessary and why we had to do it. It's sort of like a payoff; At least for us it is.

Definitely. Now prior to tour, you mentioned the band was working on Circa Survive LP four. Odds are you will head back into that writing mode after the tour, but what can you tell us about the writing process thus far? How's everything been going?
Well, a bunch of the songs from this session were written with just an acoustic guitar, and then we built stuff off of it. But I would say this writing session probably mirrored that of the Juturna writing session, where the band would come up with an idea and I'd be in the other room working on something that was instrumental. They would come up with ideas, record them full band and then send them to me. We'd be in the same house but in different rooms; so they'd be writing and recording instrumental stuff and I'd be in the other room recording vocals over top of it. And then we'd spend the next week doing the same thing but re-recording some vocals. But a typical day doesn't really exist for Circa Survive; We change things up constantly. One thing I really enjoyed was riding my bike three or four miles from my house to where we record and rehearse. It's made every day feel more filled with energy. Waking up every day at six in the morning with a one-year-old and putting him to bed super late; it was difficult to adjust to that. But other than that, it was one of the best writing experiences I've ever had.

You guys came down here to Toronto to record Blue Sky Noise, which was somewhat of a dissimilar experience for Circa Survive. What did you learn from that whole recording process, and ultimately, have you thought about setting and procedure for this upcoming record?
Yeah. I think that being in Toronto was incredible for everyone. But there were obviously downfalls to it just because we were far away from our families. That worked in one sense because there were less distractions, but there wasn't a warmth factor that was there; both figuratively and literally - because we got super cold towards the end of the recording cycle. So I think we want to try and retain little bits of familiarity. I don't think we'd go to Canada or some place really far away to record again, but we're talking about a lot of different things now and the main thing is just always being focused, you know? Finding a balance between having what you need to be comfortable and being out of your comfort zone; It's a hard balance to find.

This is going to be your fourth full length record; You have a couple of EP's as well. That said, this may be somewhat premature, but have you thought of a main goal you would like to accomplish with this record?
I haven't really thought about it. I really think that with each release I just want to feel we did our best. I've never set out to accomplish this type of success or this type of notoriety; it's always just been about writing a record I can play for my friends and that I'm proud of. I think we've accomplished that with every record that we've done. And after that, everything else is less important. As long as you have something that you're presenting in a way that you're comfortable with, or just excited about, that is the main accomplishment; Everything else after that doesn't really matter.

Obviously your life has changed quite a bit in the past year; You have your new baby boy and spent a lot of time with your wife and family over the summer. Where are you at now from a writing perspective that you weren't necessarily at while writing Blue Sky Noise?
It's hard to say if that type of thing is involving in a way that has taken me closer or further away from where I'm supposed to be; It's hard to tell. But I feel good, man. I don't feel trapped, or under a bunch of super heavy burning blankets, you know? To me, that's all that matters. It makes it easier to like what you're doing when you don't feel so insecure and you're not searching for everybody to validate what you're doing. But it's really hard to be concerned with things like that, because the only things that really matter to you are your family and friends; That stuff's not going to run away.

And you're clearly not a rookie anymore when it comes to the writing process, or the music industry in general; You've learned a lot and evidently it has helped get you to where you are today. But is there perhaps one thing you've learned in the last year and a half since Blue Sky Noise that you hold close with you today, and ultimately, may play a role in shaping this upcoming record?
Definitely. I would say that when you're writing an album and there's a lot of stuff going on; I just use to really doubt myself so much, and I didn't realize how unhealthy it is to dwell in a sense of doubt. You can always think to yourself that you're not good enough, but if you just tell yourself that you are good enough, and you're doing something that you know is good enough and is better than good enough; That's how you overcome it. It's easy to sit back and doubt yourself and dwell on that, but things aren't going to get any better that way. You need to convince yourself that you can do it and you can do anything as long as you're focused and not willing to give up. These are the things you need to carry with you, even if it seems impossible sometimes.

That's great advice, Anthony. Lastly, I don't want you to give away any of your set list tonight or on this tour, but can you perhaps share with us one song you're really looking forward to playing?
The one song I'm really excited about is a song from Juturna that I love playing called "Stop the (Fucking) Car". We ave this little jam right at the beginning of it and it's my favorite part of the whole set. It's towards the end of the second half. I love being able to kind of just make stuff up every night, so it's probably my favorite song to play in this set.