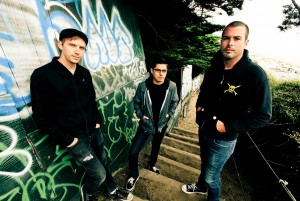 Recalling familiar elements of Bay Area melodic punk favorites, including Jawbreaker and Samiam, San Francisco's Nothington recently released Borrowed Time and embarked on a European tour last month in support of it. Thanks to the good people at Red Scare, the band's label, staff interviewer Andrew Clark spoke with guitarist/vocalist Chris Matulich about touring in foreign countries, writing lyrics, and his thoughts on the 'Orgcore genre.

Congratulations on the new record being released this month. What was different about recording this time versus before?
Well the process was very different this time actually. We wanted to do more with less money which makes no sense at all, so we ended up using the studio after hours, doing a lot of tracking ourselves and file organizing ourselves to save money. I have a little bit of a recording education and I always record our acoustic songs and demos, so we did a lot of the final tracking in 2-3 hour late-night sessions a few days a week for about a month. This allowed us time to experiment with backing vocals, layering guitar textures, different leads, different tones and vocal melodies. We ended up recording a lot of things, then choosing what was actually adding to the song and leaving out what we felt was overkill.

The boss-man, Toby, tells me you are currently touring Europe in support of the new album. How have things been so far overseas?
The boss-man is right. We did just get back from a month-long tour in Europe and the tour went great. We played a lot of smaller towns, a lot of big cities and everything in between. Every show was a little different than the last, and we made a handful of new friends over there. We saw some cool sights along the way as well, and that's about as much as you can ask from tour being in a small punk rock band like Nothington.

Has the language barrier been an issue for you when playing abroad? In my experiences in the Middle East, American music, even punk, is popular and relatable despite language.
It is sometimes an issue, but not as often as most people would think. In general, the people running the shows, promoters, bartenders and sound people speak a lot of English. It's when you step outside the club that you might not be able to communicate as well depending on what country or city you are in. When it comes to music, it's interesting that I had more than a couple people tell me that they learned English from listening to American bands and watching American movies.

Switching back to the new LP, after listening to it I have noticed some overarching themes of confronting shitty situations, touring, and self-medicating. Could you elaborate on what contributed to the lyrics?
I think life just gets hard sometimes and those times/feelings are interesting to write about. It's a positive way to confront those things in order to eventually move on from them. Nothington has never been dealt an easy hand, and maybe the years of loss and struggle we have endured in order to do what we love are reflected on this record. And in order to not sound ungrateful, let me just add that this band has been the best thing I've ever done in my life, but it hasn't been an easy road, and that probably comes across in some of our music.

Also lot of these songs started out being very personal for us when we were first writing them, which is why a few of them have references to touring or traveling. But I don't think any of these songs are really about touring, they are about experiences and emotions we have had to deal with while on tour, and hopefully people can relate these songs to their own lives. For example, the first song on Borrowed Time definitely came from Jay's feelings of separation and loneliness while on tour, but you don't need to have ever been on tour to know what it feels like to miss a loved one who is far away. That's what that song is about, and hopefully people can relate to the true meanings of these songs even if they don't fully understand the exact situation the song is set in.

Speaking of all these things, how do you feel about the emergence of the "Orgcore" genre, which I am sure some readers would lump you in with?
I'm not exactly sure what "Orgcore" is… It's like the music that punknews supports most? Or is it a sound? When I think of Orgcore I think of Gaslight Anthem, OWTH, Iron Chic and the Menzingers… Am I even close here?

If you have seen the website yourscenesucks.com one of the tell tale signs of an "Orgcore" fan and/or band is lots of drinking. Do you think you fulfill that dimension of the stereotype?
Yeah I guess we do. Itâs starting to sound like a lot of bands fit into Orgcore now.

Any stories you would like to share pertaining to the mixture of booze and playing live?
Hmmm… There are a couple of good ones but I'll give you this one since we are on tour with the Cobra Skulls in the US right now - On one of our first US tours Luke Ray (who now plays in Cobra Skulls) was playing drums for us. We were playing a really dirty basement show in Boston with tons of broken glass, and water leaking all over the floor, and a staircase that actually fell apart at one point leaving people stranded down there for a bit. The two of us decided to not hang out in that mess, and go the van and see how much whiskey we could drink. Turns out we could drink a lot. We played the same song 3 times in a row before they turned the power off on us. It was a short song, and we thought it was funny…. Guess no one else did. Best. Show. Ever.

Since we are talking about drinks, any recommendations for our readers aside from the standard cheap beers?
Remember to drink water every now and then between your cheap beers, you'll thank me in the morning.

Finally, I would like to thank you for taking the time to answer these questions. I always end by allowing the band to have the last word, so feel free to say anything you would like.
I'll just say thanks to anyone who has checked out our new record Borrowed Time. We put a lot of work into it so hopefully people will find some good in it. Other than that, please check out our tour dates on Facebook or whatever as we are on a HUGE US/Canadian tour with our friends the Cobra Skulls. We are really looking forward to this tour as it is our first US tour in over a year, so we hope to see you in your home town or at The Fest! Cheers…. Go Niners.