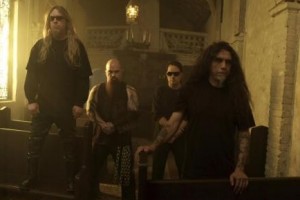 Updates have come out of the camp of thrash titans Slayer. Drummer Dave Lombardo posted on his Facebook page saying the band has begun writing their next studio album. The record would follow 2009's World Painted Blood. According to a previous statement by bassist/vocalist Tom Araya, though, the band will not enter the studio without guitarist Jeff Hanneman, who has been undergoing treatment and recovering from necrotizing fasciitis he contracted earlier this year in January. Lombardo went on to post that Hanneman is "still recovering and doing better."

In the meantime, Lombardo is in the process of mixing the debut album for his side-project, Philm, to be released by Ipecac Recordings.

Thrice: "taking a break from being a full-time band"