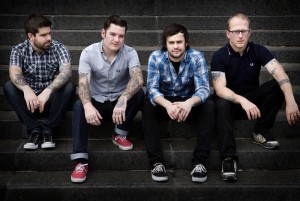 It's been one hell of a ride for Senses Fail. With a successfully establishing debut EP, four popular full length records, as well as endless tours and countless festival dates to their name, the pride of Ridgewood, New Jersey continue to assert themselves as frontrunners in the competitive post-hardcore scene. Most significantly, Senses Fail appears to have no end in sight.

Primed to celebrate their tenth anniversary as a band, lead vocalist Buddy Nielsen took some time to converse with Mark Millard about their recent lineup changes, plans for the New Year and some of the important realizations he's made over the years in order to not only develop as a musician, but as a human being as well.

Catch us up man. What has the band been up to and what's the general vibe heading into 2012?
We spent the beginning of the year looking for a new guitar player. Luckily we found an amazing one in Matt Smith. He also plays in Strike Anywhere. We toured the UK in February and then did a B-market headline tour in March; basically hung out most of the summer and played some shows here and there. We then followed that up with another short headline run in November. 2012 will be our ten year anniversary so we are making plans to do some things surrounding that. And eventually in 2012 we will get into writing a new record.

In the summer, you mentioned you had a few writing sessions. Are there any ideas in place or are you simply set to start from scratch? Can you tell us anything about the direction of the new music?
Since we have new members, two new guitar players, we wanted to get together and figure out how the new writing process would work. Those sessions in the summer were more for feeling out how things would go than for actually writing new songs. We did end up coming up with some great stuff, which we weren't really expecting. I would say with the new music, you will be able to hear more influences from Jason Black and Matt Smith, while keeping to what he have been in the past.

Have you thought of any concepts or themes you might like to explore lyrically this time around?
Honestly, not really. I am not sure where I will go. I have kind of spit up a lot of the things that I have been through in the last couple years, but Iâm not really sure where I will draw from for this. That will typically happen every record and then I get to writing and it works itself out.

I find a really big reason for the bands success comes from your personal lyrical content, which so many of us can relate to. That said, what is your ultimate goal when approaching a record? What are you trying to convey with such personal lyrics?
Thanks man. I just always want to make a record that is honest and easy for people to relate to. A lot of why the records are so personal is because it is my form of therapy in a way. I try to get out all the things I don't otherwise have the opportunity to.

How are you feeling these days as opposed to five or six years ago while you were writing for Still Searching?
I am a completely different person then who I was when I wrote that record. I was in a really, really bad place. I know it is our most successful record, but I would not want to go back to a place like that in order to have success. There were a lot of things I carried on my shoulders that I have been able to let go of in the years since and I have gained a lot more self confidence, which I lacked. I was also 22 years old. I think there is this misconception in our society that once you turn 18, youâre an adult. My early twenties were, to me, what the stereotypical teenage struggle is supposed to be. I had no idea what I was doing, where I was going or how to come to terms with any of the things I had to in order to become an adult.

In February, you're primed to celebrate your tenth anniversary as a band; an amazing accomplishment. What does Senses Fail mean to you personally?
I guess Senses Fail, in a way, is my identity; for better or for worse. Over the course of the last year, I have tried to separate myself from the band in the sense that I don't want it to define my entire being. I realized I was judging my self-worth based upon the success and or failure of what the band does. I think most people involved in music see their music as an extension of themselves and therefore judge themselves based upon how well it does. I think in order to continue to make music for years and years, you need to step away and see it for what it is; an amazing opportunity to do what you love. I am much happier where Senses Fail is at right now than ever before. Regardless of record sales, or ticket sales, it is more fun to be in this band than it has ever been.

When you first released