James Carroll (Make, Do and Mend) 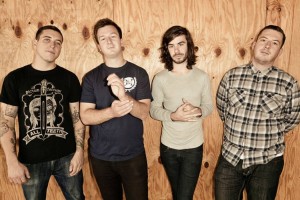 The guys in Make Do and Mend had quite the year in 2011 between touring, signing to a new record label, and recording a new EP of acoustic songs. Like their peers in "the Wave," the Connecticut band demonstrates a passion for their craft through their seemingly constant touring and musical output. Punknews staff interviewer Andrew Clark spoke with guitarist/vocalist James Carroll about the band's upcoming 2012 release, growing up, and what makes the Northeast unique when it comes to food.

I hear you guys are on tour currently with Thursday; congratulations! How did you end up getting picked up by Thursday for one of their final tours?
We actually join up with those guys the day after Christmas. Needless to say we are ecstatic to be playing those shows. They hit us up about joining them for those shows. It is a true honor.

These past few months have been quite busy for you guys from what I can tell. Aside from doing the tour, you recently released an acoustic album, Part and Parcel, through Paper + Plastick Records. How have fans received it?
It seems as though people dig it so far. Which is a really nice relief. We definitely went out on a bit of a limb with this one.

While some people think of acoustic albums as kind of filler for bands, I thought you guys took some risks with this release, even covering a TouchÃ© AmorÃ© song. What prompted the decision to go this route, over, say recording all new material?
Thanks for saying that. We definitely did not want this record to come off as filler. We wanted to make sure me put as much thought and effort into it as we would anything else. From the beginning we wanted to do a cover to keep it fresh. Doing a take on a band that is really anything but acoustic was really fun.

I'm sure you've been getting a lot of this, but what are your plans for the next album in terms of recording schedule and expected release date?
We go in to record the new one at the end of February at Red Room in Seattle with the one and only Matt Bayless. The record should come out just in time to ruin everyone's summer with sadness.

Is there anything you've learned from previous recording efforts that you hope to integrate into the new LP?
I definitely want to challenge ourselves the way we did on the EP. I want to make sure the songs are as interesting musically as they are lyrically and vocally.

Speaking of albums, I wanted to say thanks for putting out your previous albums. They have done a great job of summarizing a lot of the emotions I have felt since moving out on my own and getting done with school. If I may, could we talk more in depth about some of the lyrics from a few songs?
Thanks very much for saying that, man. Making a connection is really the point of what we do.

One of the songs, "Oak Square," really hit home this fall as several friends became engaged and are talking about buying homes. Given the songâs lyrics, did you have something similar happen?
Well as we all get older, especially doing what we do, the real world seems to pass by while in a lot of ways we seem to sit still. Just yesterday I got a save the date for one of my best friend's wedding. It's a strange thing to see what different schedules and value scales normal people operate on.

Another salient element of your lyrics is coming to terms with the different paths we each take in life depending on particular decisions we make, such as being in a band versus working a 9-5. What keeps you going in the direction you have taken thus far?
To be honest sometimes it feels like we just don't know how to do anything else. But at the end of the day we love what we do and playing in a touring band is what we've dreamt of doing since we were kids.

In addition to addressing interpersonal relationships, you guys have a number of songs focusing on what might be seen as existential questions: Why are here? Is there a God? If so, what is its role in life? Has anything specifically inspired you to make music tackling such things? Why not just sing about girls and boozes like the Dopamines?
I think those thoughts creep up on all of us. We all struggle with them at one point or another. I just happen to struggle with them way more than most normal people. Either way, booze and girls are annoying.

Now onto the really hard questions. You are probably aware that you guys have been considered part of "The Wave," a term used to describe bands that are friends and according to some are, "the saviors of hardcore." How do you guys respond to this?
Friends? Definitely. Saviors? Probably not.

Being a fellow Northeast kid who grew up in southern New Jersey, is there anything you miss about the region when you are out touring? I know since moving to Washington, DC I wish people here knew more about the greatness that is a hoagie.
There are plenty amazing things about the Northeast. Not being able to get legit Chinese Food anywhere else is definitely tough. Especially touring during the summer, I miss Boston. But now that we are gearing up for a New England winter I'm starting to wish I was anywhere else.

Lastly, I would like you guys to have the last word. See you in a few weeks at the DC show!
Thanks a ton for the interview. See you soon.

Videos: Refused to reunite at Coachella