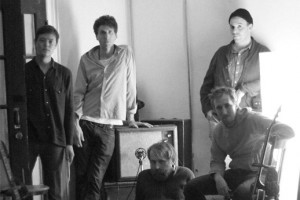 by Adam White Music 10 years ago

Baby Eagle and The Proud Mothers are set to release Bone Soldiers on March 6th via You've Changed Records. The album is the latest release from former Constantines co-vocalist and guitarist Steve Lambke, following up last year's Dog Weather. His band this time out features Will Kidman, another Cons alumni, along with Attack In Black members Ian Kehoe and Spencer Burton and Peterborough, Ontario's Nick Ferrio. If you're keeping score the associated solo acts with those four are Wolly Leaves, Marine Dreams, The Grey Kingdom and Nick Ferrio & His Feelings. The record was recorded in Toronto at the 6 Nassau studio by Jeff McMurrich (Fucked Up, Bry Webb, John K. Samson).

Click below to check out the songs "Brave Women" and "Bone Soldiers" along with some upcoming Canadian tour dates.