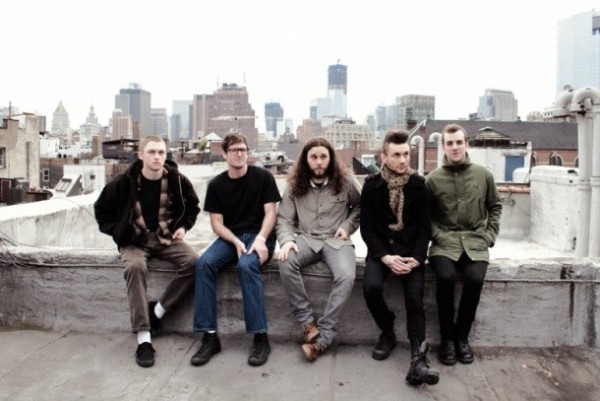 The concept of a Zoo can have positive and negative implications. It is a place of happiness and wonderment for many children, yet it is also a place where various species are caged, far removed form their natural environment. Why did you choose the title?
We were probably leaning towards the second definition. I think [lead vocalist] Ross Farrar chose it as a reference to human beings on this earth. There are a lot of parallels to animals. We don't really have a choice to be here, we're just are here, in our environment. Ross wrote a really Interesting essay on the front of our website that really delves into why he chose the album title. The album is definitely a reference of someone being caged, I suppose.

Zoo is quite different from Rohnert Park. I particularly like the new, stranger sounds that the band has developed on this record. To me, it seems to give the album a very reflective, cold tone in parts
I think that the first thing people will notice the is Ross' vocal delivery in comparison to the last record. Whenever people have heard it before, the people were like, "is this Ross?" and I'm like "yeah!" That's the most apparent difference.

Explain to me how the newer elements of the band developed.
When we were in the studio for the song "Video", that song went though a lot of phases. It started out as an interlude, and then we decided to draw it out and add vocals, and the producer suggested a different drum beat. It was really a song that evolved until it was done being recorded. When I first heard the rough mix, me and Ross look at each other and were like, "Did we seriously just write that song?" If you played that for us when we started the band, Iâd be like, "Get the fuck out of here!" Iâm really proud of it.

Was the band's advancement part of a strategic plan, or was the change more natural in development?
It wasnât conscious. I feel that with every album thereâs been an evolution, a growth. This is just where we took it. We have evolved as people a lot since we started the band. Between our releases, we come into the writing process with a fresh outlook. Like every time, because we've changed as people, it's going sound different.

Certainly. However, as interesting and unique as the new record is, there are already older fans that have been somewhat challenged by the band's latest direction. What would you say to them?
Say we did make a record similar to our previous stuff. The people who weren't really digging it would be like, "I really wished they evolved", and the people who are saying "I wish they did that same thing all the time" would be happy. So really, it's a lose/lose situationâ¦ or a win/win situation. There are always gonna be people who have their opinions. We don't think about that.

I think that if you showed all our records to someone who had never heard them before, I think they would probably like Zoo the best. I think without the frame of reference, without our previous stuff, I think it's a no brainer. We don't take what people think into consideration with regard to our art. Why would we worry about what some else would think of our art? If you like it, great! If not, I'd rather make a record that is honest than a record made for other people.

So then, if you write music exclusively for yourself, do you even care if people like it or not?
When we are writing music, we don't taking into consideration what people, are going to think. But, I would definitely would rather rave people like our band than not like our band. When people react positive to it, or react anything at all, it's always a great feeling. We're able to sustain as a band longer. We worked hard on this record. We worked hard on all the records that we make. It's ultimately what you want, so if it doesn't happen, at least we were honest.

When I hear Zoo, I hear a touch of the Cro-Mags, a touch of Wire, a touch of The Cure. Between last year's Covers EP and the b-side Urinals cover on the Hysteria single, it seems that a great deal of conversation about Ceremony has concerned the bands roots. When crafting Zoo did you consciously set out to reference your inspirations?
I think, not consciously. I think all of us that are in the band have a very broad palette. We all have this musical lineage that has been developed since we started listening to music. Whatever influences we have filtered through into Zoo.

It seems to me that most of the greatest punk bands, donât worry about being punk at all- Bad Brains, Wire, Jello Biafra, Fucked Up, Black Flagâ¦When writing Zoo, did you contemplate the concept of punk at all?
I would say that we are a punk band. I don't think that itâs crazy for us to say that. I think that punk is the sub-genre that we have always been comfortable in. Even if we veer outside of that, there is still that common denominator. We didn't write and say something, "needs to sound more punk." That's just where we come from.

Whereas, bands like Black Flag or say the Ramones, there wasn't much before them. It's different with us because there is Black Flag and Dead Kennedys and the Ramones. The bands that influenced those bands were rock bands- punk hadn't been established yet. The Ramones wanted to be a rock and roll band, they wanted to be rock stars, but didn't have the chops, so they just did what they did. But with us, at the core, we are a punk band, but we're able to cite those influences.

I think it's fair to say that at punk shows, the audience dresses in a fairly uniform style- black t-shirts, maybe some patches, and dark jeans. Yet, on stage, I've seen you wear bright pink, have on mascara, and you once even had a Poison/Ratt style headband! Is your unique clothing choice a purposeful commentary, or is it just what you like to wear?

Then do you feel that your approach to fashion could be considered a metaphor for the band Ceremony itself?
Yeah, absolutely. I don't think Ceremony the band goes with a uniform physical appearance, but with lifestyle and the band's direction and sound, I actually think that there are parallels.

There is a rumor that a little while ago, while in Portland, the band collectively picked up a street walkerâ¦ Spill the beans!
The story is, when we were in Portland Oregon, for some reason, half the band was split up. Our old guitar player Toast, and a roadie and I were in the van. We were getting food and were at this gas station downtown. We saw this women, who was a prostituteâ¦ aâ¦ roughâ¦ prostitute.

Someone thought it would be funny to pull over and talk to her. She was, you know, trying to persuade us to buy her "product" and Toast told her to get in the van. The people in the van were dumbfounded and thinking, "what are you planning on doing?!"

So, Toast just wanted to pick up the rest of the band with her in the van for some sort of shock value and then we dropped her off where we picked her up. There was no sexual favors. It was a prank. We just shot the shit with her for 5 or 10 minutes. She was cool. Once she realized that we weren't going to do anything, she was chill.

Any last comments?
Our record comes out March 6. Weâll be playing a lot of shows this year and hope to see you there!