American Laundromat have announced their forthcoming compilation, A Tribute To Repo Man. The collection, due for release on the September 18, 2012, features a range of bands including Polar Bear Club, Mike Watt and his Secondmen, Amanda Palmer and The Grand Theft Orchestra, Black Francis, and more, covering tracks from the original California-heavy soundtrack to the cult film.

(By the way, if you haven't seen it yet, you can check it out on Netfflix Streaming.) 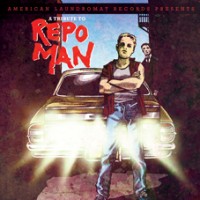