by Richard Verducci Interviews 9 years ago

There is no doubt that music and fashion intersect. Whether it's Lady Gaga's over the top red carpet looks inspiring high fashion or Kurt Cobain's lack of interest igniting the flannel craze of the early 90s, music and fashion are congruous. Punk rock is no different. Argue all you want but there's an undeniable image that comes to mind for most people when they think about "punk". Perhaps it's a different image for each person, but everyone has their image and they're all associated with some sort of fashion.

Enter the shadow organization of VNM. Comprised of an unknown number of members and with no clear agenda, VNM seems to have sprung out of nowhere to produce a style that is both interesting and void of so many "punk" clichÃ©s. To learn more about VNM, Punknews Editor Rich Verducci traded a series of written correspondence with an unknown member of the organization, talking about inspiration, business and why Tyler Perry isn't in jail yet.

The information regarding VNM, including things like a mission statement and people involved, seems to be hard to find anywhere. Is this something you've done intentionally?
We are intentionally vague about who/what is involved with the brand. We don't think it really matters that much and we prefer the stuff we make to stand on its own. 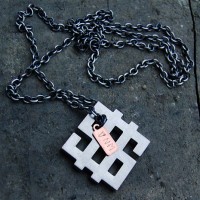 That said, would you be willing to shine a little light on what VNM is/does?
We all work together in the Black Axe which formed in 2008 and know each other from all living in Florida at that time. Yardley and I have been friends for a really long time from playing in bands back in the day when New Mexican Disaster Squad was together. After forming The Black Axe we decided we really wanted to start a clothing brand and make the junk we want to have/wear because no one else is willing to set their money on fire for a laugh. We started VNM in 2010 but it took a while to actually get the ball rolling for real. We knew going into it that it was going to be hard and not a money maker but that was totally fine. Yardley and I basically work the creative side of VNM like designing the shirts and stuff and Kevin and Joey do a lot of the web and business side of it. It works out great to have everything under one roof and basically do everything besides the actual printing. We're learning a bunch as we go along but it's nice to only do what we want and having complete creative control rules for once.

The members involved in VNM have all taken part in design prior to this (perhaps most notably Richard Minino and Horesebites), what makes the work for VNM different than those projects?
Well basically it doesn't feel like work to us. It's like starting a new band and getting all pumped on ideas you have. There's no one above us tweaking out our stuff. I've had so many album art jobs where the band thinks it over so much and there's usually that one guy in the band who always has a difference of opinion just because he can. That's the worst. They're just disagreeing with the rest of the guys so they feel like they're of importance. Can you tell I'm jaded?

Have you ever worked on a project for a company or band and come up with an idea that you really enjoyed and decided to keep for your own projects?
No, but the mental pain associated with other people's awful ideas helps us get weird. We're really focused when it comes to our designs and I would feel like I'm cheating our company by just picking a random design that looks cool.

So far you've had a Fall 2011 and a Spring 2011 "Collection" or "Look book"? Is there a point you feel you're ready to release a collection? Is it a certain number of pieces or just when you feel you've completed a certain look?
It's kind of an industry standard to release a group of shirts at one specific time depending on what season it is. We sort of have a goal when it comes to our next release of stuff. Obviously if it's summer than we'll have more short sleeve shirts and stuff as opposed to winter where you expect to see more heavier gear (unless you live in Florida like I do and it's an endless summer). Although we do like to release stuff in between like patches and wallets to keep that flow of movement and progression going. We try to make a few things for a big "collection" but it's never a certain number. I can't help but keep thinking it's like being in a band, touring and releasing new albums. Just like how a band makes a Full Length or an EP, we cut out what we like and don't like about it. It's like if you had 5 Bad Religion albums laid out and there's Into The Unknown just sticking out like Jewel's snaggle tooth. Fuck that, it's out!

Are there a lot of ideas or designs that don't end up getting used?
There is a handful of stuff that goes unused in each round of crap. We find it better to just get all of our ideas onto paper, then stand back. The stuff that doesn't work is usually pretty obvious. We go back to a lot of older ones too and it kind of reminds of the direction we were trying to go and help with inspiration for more new and better designs. 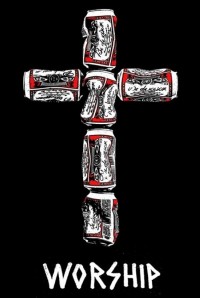 You've branched out from the standards of t-shirts and sweaters and more recently done items such as necklaces and wallets. Do you see VNM continuing to branch out into other accessories/mediums?
Yeah definitely. We don't see any reason other than finances to restrict ourselves to that stuff. So as our means allow we will try out anything we think is stupid enough. There's definitely some stuff that's just ridiculous looking back at it like making a VNM bong or something but hell, I'd use it. I honestly would love to see more apparel items like jackets, jeans, rings and other stuff rather than shirts. There's only so much you can do with a shirts design. It also helps to have one of our close friends be a beast with leather work. Now that I say that it sounds like he'd be wearing a leather gimp mask and leading an army of mutants searching for gas in a post-apolyptic world all while wearing a studded thong. For real though, his name is Seth and he does his own thing called Imperial Wolf Leather. He makes all of our leather goods in his garage and it's cool to see how much care and work goes in to every piece so we'll be doing a lot more goods with him on board in the near future.

I know you've done some work for Bitwell Inc., who you seem to heavily support. Are there any other companies or artists you would recommend people check out?
From being in multiple bands we love working with other bands on things from doing a The Flatliners tour poster to sponsoring a punk benefit show in Montreal. It's more about friends that we know from touring in New Mexican Disaster Squad and No Friends. Sam from Dead To Me supports our stuff a bunch and it's cool to see him in Russia wearing a shirt that has a crucifix made out of beer cans on it. Very distinguishable. Also Chris from Flatliners has been super cool to us, he's always looking for ways to support and help us out. It's people like him that we gravitate towards cause he gets it. Also Jason from Hot Water Music and Senses Fail has been super supportive with us and digs it so that's really cool and flattering. Did I drop something?

Shortly after Osama Bin Laden was killed you posted this image on VNM blog. How frustrated are you that Tyler Perry is still at large?
Bummed out, I heard that idiot got out of jail too.