As recent signees to Deathwish Inc., you would think that Loma Prieta were actually a new, upcoming band. Rather, they've made their mark on and have been mainstays of the Bay Area hardcore scene for over half a decade. Delving further into Loma's past, you'll find that I.V. is actually their fourth full-length (imagine that) as well as their Deathwish debut. But don't let the mystery of Loma Prieta fool you: featuring members of the bands you loved from first listen (Punch, Beau Navire, Us Haunted Bodies), they've released four 12-inch records and two 7-inch records overall, mostly on their own Discos Huelga label. To better understand the absolutely immaculate sound Loma Prieta possess, begin at "Trilogy 4" and listen as the suite descends into perfect chaos at "Trilogy 6." This three-minute track is a perfect buildup to the remainder of a perfectly streamlined sound that completes the record, and I.V on the whole hits that mark that the band have strived for with their previous releases. Loma Prieta tracked the 12 intensely emotional songs that make up I.V. under the guidance of Comadre's Jack Shirley at Atomic Garden Studio, taking from Converge, Ampere, Pg. 99 and others to create a beautifully unique combination of each and every one of their influences. Before embarking on a month-long run of European tour dates, Loma spoke with Punknews Copy Editor Amelia Cline to get a better understanding of who and what makes up the band. 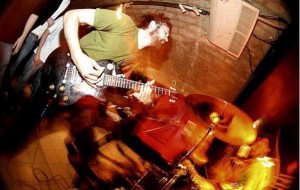 Iâd love to get a better understanding of your backgrounds. The band have been an vital part of the Bay Area community for over half a decade. Whatâs it been like, growing musically while also growing up with the city and scene to which you contributed so much? How did the band come to be?
Most of us grew up in the Bay Area or have lived here for more than ten years now. I feel a huge debt to the local music and art culture hereâcertainly I would not have had the same exposure to such radical creative ideas if I'd grown up somewhere else. Iâve tried to move away, but could never be happy anywhere else. My old band used to play with Sean's other band Archeopteryx, and I think we just both had a mutual admiration for each other's playing style so we started working on some songs together. None of those songs ever got recorded, but they sounded nothing like our first recording and actually sounded a lot more like the stuff we are doing now. When we recruited other people to come play with us, our sound changed a lot and it's been refreshing to get back to playing the music that we originally set out to play when we first started the band.

About two weeks ago, I saw you guys play in Birmingham, Alabama at the Firehouse, the venueâs last show there before they moved to a different space. It was a floor show, so I felt like the crowd was able to get into it as much as you guys were. That said, during your set I saw that three strings get broken. Does that happen pretty regularly?
We tend to break things very often. I think our goal is to play as hard as possible, and with that comes a lot of destruction. People ask about the string-breaking a lot so just to officially clear it up, we play appropriate gauge strings and have the guitars professionally set up, but the strings come under a lot of stress from all of the various tunings that we use. I think at this point, we know how to make our songs sound decent with as little as ten combined strings amongst both guitars and bass.

I think that says a lot about you guys as talented artists. Whatâs it been like working with Deathwish Inc. after releasing music on your own label, Discos Huelga?
Itâs not much different. We still basically run the band the same way we always have. The fact that Deathwish is helping us out now has given us the freedom to focus on putting out new records since it became too laborious to continue repressing our own records from the road. This year we should be doing a new 12-inch by a band called Coma that feature members of Loma Prieta, Graf Orlock, and the Separation, as well as a 7-inch by the prolific Skin Like Iron.

I was so impressed by the video for "Trilogy 4 - Momentary" by Evan Henkel. The footage captures you in what looks to be a really packed-out basement show. He also did the video for "Fly By Night." What was your reason for choosing those songs for videos?
Those songs seem to capture the two extremes of I.V.âthe sort of harsh noise parts pitted against the sort of orchestral melodic parts. We want to show our dimensionality. Also, we want to play those songs live because they're really physical, so we figured it'd be nice for the audience to have heard them before.

Last year, I was working the door at The Fest 10âs Holiday Inn Sunday show/party and you guys happened to come up and ask to come in. At the time, things were so hectic that we couldnât let anyone in, but I remember being dumbfounded you guys had come to town for the festival. Though you werenât on the Fest, I heard you played two really amazing house shows. What has your experience been for playing last-minute shows like that and is there any particular type of show setting you prefer to play in?
Well, we were actually in town because two of us play in Punch, so we were able to route the Loma tour around being in Gainesville over Halloween weekend. Also, you must be mistaken about not letting us in because not only were we in there, but we also snuck in about 10 people who flew in from out of the country for the Fest. Take that, Fest! Some of the footage from our show that got shut down by the cops made it into the "Trilogy 4" video.

That rules. So, youâve also toured Mexico, Canada, Japan and the U.S. several times. Have you had better experiences in foreign places or had more of an accepting crowd/people to help make the show happen?
The punk DIY community is so strong worldwide and it is so inspiring to feel the same excitement wherever we go. There is no difference from place to place, just show to show since everything is reliant on the individual involved. That being said, we are about to embark on our fifth U.S. tour. Before this year, we'd really only done three full U.S. tours, mostly due to school and work restrictions that are no longer upon us.

Back to the San Francisco side of the world: Indian Summer is one of my favorite bands including Mohinder. What was it like seeing such creatively rich and distinctive bands such as them back at home? Do you feel like San Francisco is keeping that creativity alive currently?
SF and Oakland never cease to amaze as far as great bands go. We honestly don't play at home that often these days since we are on the road so much. That being said, incredible musicians and creative types live in the Bay Area and we are proud to be from there.

When I listened to I.V. for the first time, I thought about how the sound is portrayed through evolved, complex and very intense technical patterns. Almost chaotic. It left me guessing what was next. What allows you to keep those one to two minutes of blasts, rhythm and heaviness together so well?
I think that at this point we have been playing together for so long, now that when one of us comes up with a drum part or a guitar riff, the rest of us tend to know exactly where we want the song to go. Also, I think that just like any other song, once you know the timing it's really not that difficult to followâalthough we have run into a little bit of a problem recently trying to re-learn older songs that we forgot. We probably have close to sixty recorded songs at this point.

Last City and I.Vâs artwork are relatively synonymous but are eerily dark at the same time. Do you want your artwork to add a level of mystery to your persona?
Our artwork has been slowly evolving along with the music. I wouldn't say that we intentionally want the artwork to be mysterious, but it definitely sets the mood for each record. If someone has never heard our band, then the first impression of us they might have could be a record cover, so the art generally conveys some of the same moods that we try to establish with the music.

Finally, youâve been touring the states pretty extensively up until the beginning of May and I saw that youâll be in Europe for most of August. Besides that, what other plans are in the works?
Well, our European tour starts tomorrow, we are working on a UK tour for late summer, and most likely another full U.S. tour in the fall.

The Used banned from Canada