Excerpt from 'SNFU: What No One Else Wanted To Say' (Exclusive) 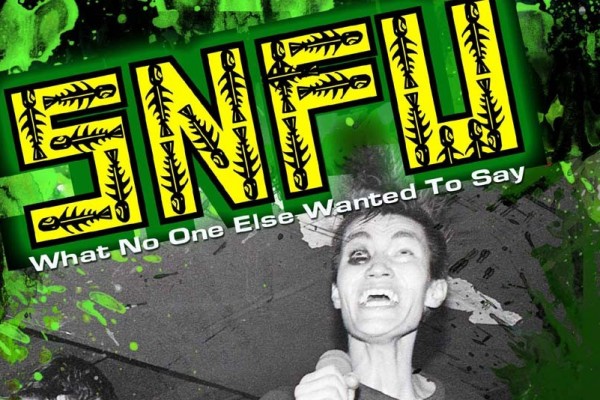 We've got an excerpt from SNFU: What No One Else Wanted To Say, a new book about Canadian punk powerhouse SNFU written by Chris Walter.

Follow SNFU as they roam across four continents, leaving a trail of furious bouncers, blown amplifiers, crooked promoters, abandoned lovers, worn-out vehicles, and broken beer bottles in their wake. From not only the mouths of bandmembers both past and present, but also from those who were there to clean up the mess and carry the gear, this is the inspirational yet difficult and even ruinous story of SNFU, the legendary Canadian punk band that never knew when to quit.

The book is available in stores and also directly through publisher GFY Press.

SNFU left Montreal full of optimism, eager to make tracks for Newfoundland. The band was booked at a fairly large venue in St. Johns, and even with all the travelling expenses, the money would be decent. Stopping in Moncton and Fred-ericton, SNFU was happy to play new places for new faces. So far so good.

In Halifax on December 9th, a disgruntled punk at the Club Flamingo tried to punch Chi Pig, who had taken his photograph against his wishes. Luckily for the singer, bystanders quickly jumped to his rescue. "If I recall correctly, Collin was a Sid Vicious clone back then, and quite a ladies man. Maybe that's why Ken took his picture," suggests punk guitarist and SNFU fan Otis Rawding, who was also at the show. Despite the incident, Chi Pig still had plenty of game left. Dressed in his finest clownwear, the indefatigable singer was soon batting wieners into the crowd with a plastic badminton racket. Naturally, he also dumped plenty of popcorn and cooking oil into the pit, making the floor dangerously slippery. Just another night on the road with SNFU.

The boys boarded a ferry out of North Sydney, Nova Scotia later the next day. "Being December, it was very cold, and the seas were rough. We almost froze to death smoking a hash joint on the top deck," Bacon recalls. The eight-hour journey was neither luxurious nor pleasant, and the woozy musicians were ecstatic when the vessel finally docked in Port aux Basques.

Then there was the long and brutal drive to St. Johns in a raging snow storm. Would the trip never end? Exhausted and cranky, SNFU arrived in St. Johns and loaded the gear into the licensed venue. Eager to do the show, the boys were taken aback by what happened next. "The phone rang, and we could hear the manager talking to someone from the Liquor Board. He was telling the manager that he couldn't hold an all-ages show in the club," recounts Dave Bacon, the outrage evident in his voice. "That sucked, because most of the ticketholders were underage."

Instead of playing, the guys had to carry the equipment back to the van and look for an alternate venue. "The kids were great, though. They fed us lobster and got us drunk on Screech," says Bacon. A school auditorium fell through, and SNFU ended up playing on the third floor of an office building, with the band in one room and the audience in another. Hardly an ideal arrangement for a group that had travelled all the way from Edmonton. The shows they played along the way helped offset the costs, but the band still lost a considerable amount of money. Mostly, the boys were disappointed to come so far only to be swatted down like a horny teenager on prom night. Marc's dislike for authority had never been stronger.

In order to make it back to Montreal in time for the show, SNFU left Newfoundland at 3:00 AM to catch the ferry, but were dismayed to learn that there was no fixed schedule and they could do nothing but wait. The ferry finally showed up around noon and the epic journey began. After a long and arduous sea voyage, the boys landed in North Sydney and drove thirty-six hours to Montreal, stopping only for gas and food. They arrived exhausted and burnt out, ready for a long sleep. This was not to be, of course, but the packed show that night was better than could be expected under the circumstances. Having rested little, the boys rolled out the next day headed for Southern Ontario. After another run through the smaller cities, SNFU crossed into the USA at Detroit. The Canadian leg of the tour was over, but the US portion had just begun.

The Detroit show was not the wrestling spectacle it had been the year before, but the turnout was good nevertheless. Bypassing Cleveland, SNFU pushed on to Athens for a show at the University of Ohio. After that, they hit Pittsburgh before moving into New York State. In Trenton, New Jersey, they met up with promoter Randy "Now" Ellis, who confessed that he hadn't booked the US leg as promised. Randy, who was currently promoting the Bad Brains, didn't seem to have time for SNFU. Instead, he handed the Canadian punks off to the fast-talking New York promoter Johnny Stiff, whom the DayGlo Abortions would soon immortalize with their song "Kill Johnny Stiff."

Dave Bacon spoke with Johnny on the phone, who told Dave they could identify him by his green hair when they met at the show. Johnny warned the band not to use his real name on the guest list because he had some sort of beef with the venue's promoter, Chris Williamson. Against their will, the band was drawn into a conflict between two parties they didn't even know. What did Hunter S. Thompson say about the music business again? Something about a dark side.

Apart from promoting shows at the Rock Hotel, Chris Williamson also ran Rock Hotel Records, and had released albums by the Cro Mags, The Nils, DOA, Murphy's Law, and others. Chris expressed interest in releasing SNFU's next album, and the group made plans to negotiate a contract a little further down the road. Although SNFU wanted to concentrate on the tour, they would definitely consider the proposition. BYO had treated them fairly, but the small label didn't have the resources to move the band forward. Under these circumstances, the boys felt it would be only prudent to shop around for a new label. Luckily, they hadn't signed any binding contracts with BYO and were free to move on.

Andy Rodgers and Curtis Creager came down from Edmonton to see SNFU play with the Bad Brains at the Rock Hotel, which was over the top in terms of energy and excitement. SNFU didn't know it yet, but the two shows with the Bad Brains would be the best gigs they would ever have in New York. From this point on, shows here would only get worse.

Bushed, the band and their guests went to stay with Dave's high-end stripper/escort ex-girlfriend and her female roommate in the Bowery. Packed buttcheek to buttcheek like punk rock sardines, there wasn't much room for privacy. Ken Chinn awoke one morning and looked at Andy in a curious manner. "Last night I dreamt that my asshole was a circus and you were trying to sneak in," cracked the frontman, causing the entire room to burst into laughter. "A comment like that is hard to forget," laughs Monk. "We repeated that line for years."

The small apartment was empty during the day, but filled up late at night when everyone returned from their various pursuits. "I remember that the place was on the third floor, and we had to carry all our gear up the stairs after each gig," says Brent. The girls were friendly and gracious, but Dave Bacon declines to say whether or not the arrangement led to any Penthouse Forum-type situations.

The Big Apple was deserted on Christmas Eve, so the group travelled to Poughkeepsie, where Monk knew a girl named Patsy. They stayed overnight, and Monk woke up feeling horrible. "I slept next to Patsy's sick boa constrictor in the kitchen, so maybe I picked up a virus from that big snake," theorizes Monk. The band stayed for Christmas anyway, returning to New York on December 27th for the second and last show with the Bad Brains. "I was so sick I thought I was going to die," recalls Monk. And the tour was less than half over.

Coliseum hits the studio with J.Robbins