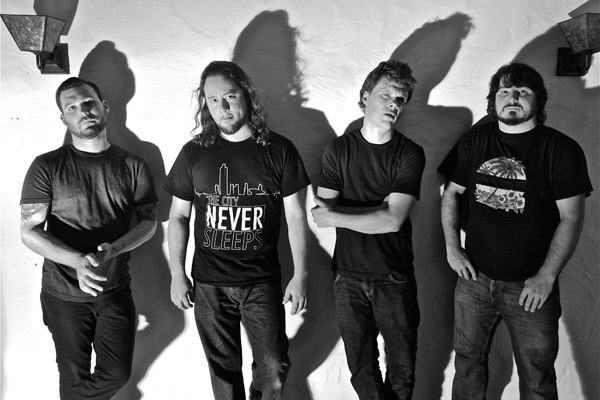 Experimental, progressive rock band "3" from Woodstock, NY is currently on a short headlining stint to promote their newest album, The Ghost You Gave to Me. Punknews interviewer Jason Epstein sat down with singer/guitarist/songwriter Joey Eppard (brother of Coheed and Cambria's Josh Eppard) at their first headlining gig in New York City to chat about the band's past milestones and future aspirations.

3 has covered an insane amount of musical genres throughout the bands history, there's been funk, metal, progressive rock, pop kind of rock and more, just to name a few. Can you tell me a bit about how the band makes this kind of mix work?
Well, I mean it's not easy to make that sort of eclectic thing work, but the reason it works for us is because were just being ourselves. For us, being explorers so to speak, musically keeps us enjoying what were doing so we're always…I think earlier in our career we were so all over the map and that was the fun. We wanted to explore this and explore that and that taught us so much. And I feel like whereas you might see the opposite with a lot of other bands, I think our sound has come together more and more over the years, it's become more and more focused and it's just a natural progression and it's fun to see where it goes next. We don't create a box to live inside of, we just sort of be who we are and see what happens.

And just to build on that, how do you make it work in a live setting since you have so many types of songs and genres to pull from?
I feel like that's where our band really shines the most is in the live setting and there's nothing like the power of…some of the really soulful stuff is really fun to do live. And for us, we made a name for ourselves, [and we're] playing to people who are expecting a certain thing so you don't want to throw the crowd a huge curve-ball, but we do like to throw a few here and there throughout our set just to show, "Hey we've got some depth here." I feel like when it's our audience and when they really know us itâs fun to do, but when you got half an hour to get your point across that's a really different situation, we'll go out with a really focused wham-bam kind of set. But tonight we can stretch out a little bit and play it by ear too. If some people start calling out some of our older songs we'll play those and we'll see what happens.

Is 3 your full time gig or do band members have side jobs?
I do a lot of solo work also and I'm lucky. There's a bunch of side projects…Daniel's got The Grape and the Grain, played his first show last night…we're all very musical people so we actually have other bands with almost all the same members that play…like we have a band called Ego that does more of the funkier, more soulful stuff from earlier in the 3 career cuz we don't get to do that anymore. It's very localized right now, we don't tour with those guys. 3 is the one touring band. But yeah, I make my living playing music. Once in a while if I have to do something else here and there I'll do something else but for the most part, you know, music is what I do. It's not easy, sometime the guys take painting jobs and such, so you gotta do what you gotta do.

It must have been exciting touring with Coheed and Cambria and getting your music out to large audiences.
Yeah, that was a lot of fun.

And it's cool that you got to do it near your hometown as well. Was there a difference in the crowd there, a lot of people showing up to support you guys?
Yeah, I mean I've been impressed with our draw in terms of the 3 fans that are showing up at all of these shows. When we're playing a city we've never been to before and there are fans showing up it's always a great time. But just you know, to be back on tour with those guys and in front of big crowds every night is a lot of fun. I love that feeling of people looking at you kind of skeptical. I love that, I thrive on that. Any tour when you're the opening band everyone automatically expects you to suck and I love to just flip that on its head and by the end of our set we win the crowd over. And then we hear night after night, the same thing, "You guys are the greatest opening band I've ever seen!" That's like our ultimate fear, really, is that's what's going to be on our tombstone. 'Best opening band ever.' No. But hey, it's a great compliment. But obviously the goal is to build our own following to the point of where we can play some pretty big shows and I can't wait to dig into that situation creatively cuz there's a lot of cool things we can do and hopefully we'll get the opportunity.

That actually leads into my next question: What are some things that 3 would like to accomplish that the band hasn't yet?
We'll see how tonight goes. This show tonight is something, we'd like to headline in NY and have a successful show and it's something we haven't done up to this point. We headline upstate and do great but down here has been a tough nut to crack for us, sometimes you get on these shows and it's like 20 bands over the course of the night getting a half an hour and to have an actual headlining show where we're returning, you know we were here last month opening for Coheed and this'll be a nice little test to see if we have a decent crowd here tonight and to see if we can come do it again. So there's one small step. We think we deserve to have a big following and we'd like to see that happen, that's the goal.

Yeah, and you guys being from the Woodstock area of course you have those aspirations, right?
Yeah and we've come close a few times. When we were real young we played the main stage of Woodstock '94 and then recently we played in Quebec City, big festival in front of 50,000 people, so that was really cool. But yeah, to headline for that many people, for the night to be yours and to do what you want, that would be the ultimate.

So you got The Studio at Webster Hall this year and next year…Rock in Rio.
There ya go. I like the way you think.

What's an interview question you hate to answer?
I'm not a very hateful person, but give me a second here… For a long time we did always get the brother of the drummer [question]…"So, what's it like to be related to the drummer in Coheed?" and I've just heard that question so many times…I don't really hate it, in fact I embrace it. I'm proud of my brother. I think what I don't like is that I think people expect us to be competitive with each other but we're really not. In fact, it's the opposite. I would say if I was going to tell you who my biggest supporter is, it's my brother and I feel that way about him and his creative efforts. He's a hero of mine and so when people try to go there…but [honestly] nothing really phases me.

Videos: Dropkick Murphys: "The Season's Upon Us"