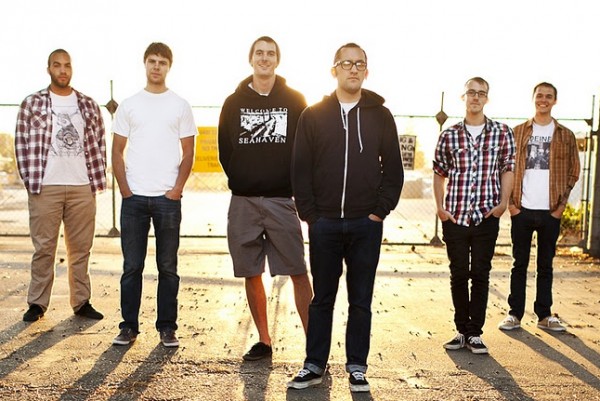 Contributed by renaldo69, Posted by Kira Wisniewski Interviews 10 years ago

Troubled Coast had a pretty amazing 2012. January's I've Been Thinking About Leaving You was a pretty intuitive setup for October's Awake and Empty and Punknews staff writer Renaldo Matadeen caught up with them just after a few shows with My Iron Lung. Vocalist Mike Scornaienchi gave us some insight into the band's progression and the shift in their spoken-word style of delivery.

On I've Been Thinking About Leaving You, there was more focus on the poetry and wordspeak, but Awake and Empty depicts you singing more…how did that shift come about?

We're kind of still stumbling here as musicians and finding out what we're capable of. I was never a singer or frontman, and before Troubled Coast I played bass in all the bands I've ever been in, so vocally I am still discovering myself. It may be apparent to the listener as I move through my different ranges and methods of communication. So expect a lot more singing now that I am finding out how to do it.

Bands like Pianos Become the Teeth and Departures offer that modern post-hardcore screamo sound with honest emotional real-world lyrics, but like La Dispute, you guys have a more poetic way about your discourse. What's with the music and poetry combo?

The music isn't so much constructed around the lyrics as the lyrics are constructed around the music. The songs are written first, then I come in and write lyrics to what the others have created. The more poetic style of the lyrics really derives from my passion and love for the literary and poetic world. When I am not doing Troubled Coast, I am a full-time graduate student studying literature and the two find a way of blending together in the end.

Would you say the new record is a transition, a progress or an evolution? Or all of them?

The new record is most definitely an evolution. It came from what we have already done and continues to grow and shape itself. I don't want to say transition because who knows, maybe we'll go backwards. And it's not a progression because maybe what we've already done was better and we'll never get any further. So, yeah, it's an evolution that I hope will prove worthy of survival.

Could you elaborate on "Lonely States" and "I'm Still a Loner, Dottie" as these seem to be getting the most demand at shows?

"Lonely States" was a great song to work on and came together nicely, I think. That song really ties the record together conceptually. Lyrically it's more "inquiry" based than "statement" driven. I'm heavily influenced by literature, and Kerouac's The Dharma Bums really pushed that song with questions of existence, truth and our connectedness to the world and others.

"Dottie" is a bit more introspective and personal, not that "Lonely States" isn't, but Dottie may be less relatable because it moves through different thoughts and periods of my life struggling with someone I use to love and fears of loving another. The reason why no songs from the January EP made it to the October record was simple: we just wanted to write new songs. We love writing music and wanted every chance and track to do it with.

What recorsd are you listening to these days and what'd you advise others to listen to?

Currently I'm listening to the new Deftones, Caspian's Waking Season and Madlib's Shades of Blue to name a short few. Our musical influences are so largely scattered. Between the six of us there are far too many bands to possibly name any we could agree on. I know Tom, the lead guitarist and musical genius of the band, draws a lot of musical influence from Thrice. Our biggest influence and driving force is just an overall love of creating music. We just love to write songs together and share them with our friends. We just played a show at our favorite local bar, kind of our hang out spot, and it was so terrific watching how music brought all our friends together.

What's up next for you guys?

We plan to tour more, we still haven't been out much…and then write more songs, try to get better and then tour more if it's in the cards for us. Honestly, the best thing a band can do is write great songs and tour the fuck out of the songs. Our label owner, Jake Round, is a gracious man who puts up with us not touring a lot because he believes in us but we know we need to be touring a lot more. We're still pretty unheard of at this point and the best thing we could be doing is touring. Besides that, hope for a little luck and be people other bands will like, not just musically, but as human beings. To sum things up…to our few but amazing fans out there, thank you so much for hanging in there with us. We hope to be touring more very soon and getting out to the East Coast and beyond.

Skate and Surf revived to include A Day to Remember, Saves The Day, Bayside